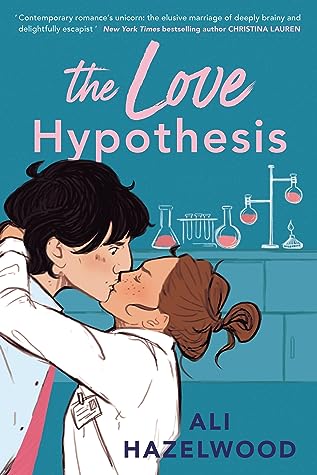 Book: The Love Hypothesis
Author: Ali Hazelwood
Genres: Contemporary, Romance
Format: Kindle e-Book
Publication Date: 27th September 2021
My Rating: 🌕🌕🌕🌕🌜
Date Finished: 4th July 2022
Description:
As a third-year Ph.D. candidate, Olive Smith doesn't believe in lasting romantic relationships--but her best friend does, and that's what got her into this situation. Convincing Anh that Olive is dating and well on her way to a happily ever after was always going to take more than hand-wavy Jedi mind tricks: Scientists require proof. So, like any self-respecting biologist, Olive panics and kisses the first man she sees.That man is none other than Adam Carlsen, a young hotshot professor--and well-known ass. Which is why Olive is positively floored when Stanford's reigning lab tyrant agrees to keep her charade a secret and be her fake boyfriend. But when a big science conference goes haywire, putting Olive's career on the Bunsen burner, Adam surprises her again with his unyielding support and even more unyielding...six-pack abs.Suddenly their little experiment feels dangerously close to combustion. And Olive discovers that the only thing more complicated than a hypothesis on love is putting her own heart under the microscope.
Review:
I bought this for 99p a few months back after it kept appearing everywhere as one-to-read.
It starts with a prologue of sorts when Olive heads for her interview, using expired contacts that force her to seek shelter away from others as her eyes protest and make her a crying mess. Only she isn't alone and speaks to a guy about her chances of getting a position. Fast forward almost three years and Olive is in the lab late one evening - when she's told her best friend she's on a date - and kisses the first man she comes across when her friend turns up out of the blue. Only Olive has kissed attractive but broody Dr Adam Carlsen who it turns out is very supportive of her plan for him to be her fake boyfriend. Things get more tangled when Olive realises just what a fake boyfriend and girlfriend are expected to do and suddenly she begins to realise the broody man isn't so bad after all.
I wasn't sure about this to start with. Everyone is a science nerd in this and a lot of the talk went right over my head. I had no idea what they were talking about when they're in the lab and being all geeky... but the relationship between Adam and Olive was cute. It was rather slow-burn but you could see from early on that Adam definitely had some kind of feelings towards Olive, while she's completely oblivious. Adam's protectiveness of Olive when he's normally so...cold was really nice to read. She was his kryptonite.
Thank God for Holden and his big mouth. He's a great secondary character and I really liked him. In fact, I liked most of the secondary characters apart from the bad guy whose name I won't mention so I don't spoil it.
I did have a little cry this morning when I got towards the end. I was very invested in these two and wanted them to get their HEA.
I will definitely be keeping my eyes open for more books by this author in the future.
at Monday, July 04, 2022