Not My Match - Ilsa Madden-Mills 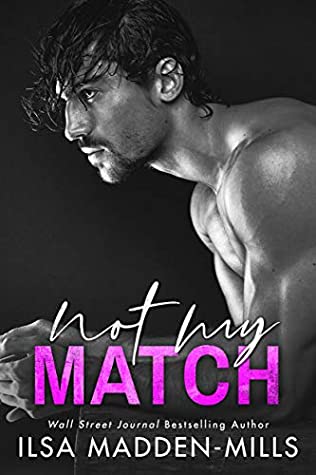 Book: Not My Match
Author: Ilsa Madden-Mills
Series: The Game Changers, #2
Genres: Contemporary, Romance, Sports
Format: Kindle e-Book
Publication Date: 19th January 2021
My Rating: 🌕🌕🌕
Date Finished: 29th July 2022
Description:
Homeless and heartbreakingly innocent, Giselle Riley walks into my penthouse and chaos follows.I shouldn’t have invited the girl genius to live with me, but it’s clear she needs my help—not only for a place to lay her pretty blonde head but in finding real love, which she’s not going to get with the crazy men she picks up online.Too bad she’s a twenty-four-year-old virgin and I’m a bad boy wide receiver. She’s off limits for a hardcore player like me—and we’re just friends.Instead, I’m her matchmaking service, no matter how jealous it makes me when I tag along on her dates.I can keep my self-control. Right? No way will I give in to everything inside me that dreams of a girl like her in my world.I may be the best wide receiver in the country, but how could I hold on to a girl like her?
Review:
I read the first book in this series a little while ago - Not My Romeo - and fell in love with it and the characters so when this popped up for 99p a short while after I just had to have it.
This starts with Giselle at a club owned by her brother-in-law's team mate and best friend, Devon, as she suffers through a terrible date. She's always been attracted to him and he's equally attracted to her but since he knows she's a virgin via his friend, Jack, he's been warned off her. Things take an unexpected turn when Giselle's building sets on fire and she finds herself homeless. Devon offers her a room until her place is back up and running and when he hears of her plan to lose her virginity before her next birthday he tries to help set her up, even though seeing her with other men is killing him.
I actually struggled with this one. I normally fly through this author's books but I just couldn't really get into it. It seemed to take forever for, well, anything to happen. It was that annoying thing of they both want the other but thanks to threats from male relative the guy backs off. It took a long time for Devon to just not care about anything but having Giselle as his. I kinda lost interest. The best bit for me was that end bit when the women ended up at the salon as they had a hair and pregnancy scare and all came together to tease and be there for each other.
I did like Devon but and Giselle but they haven't left a mark on me like Jack and Elena did in the previous book.
at Friday, July 29, 2022