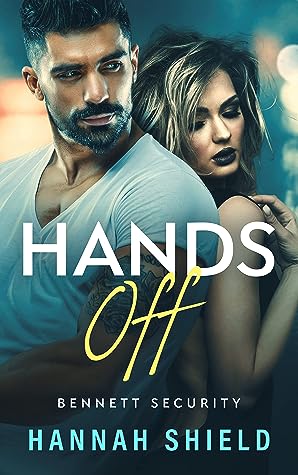 Book: Hands Off
Author: Hannah Shield
Series: Bennett Security, #1
Genres: Romantic Suspense
Format: Kindle Unlimited
Publication Date: 3rd May 2022
My Rating: 🌕🌕🌕
Date Finished: 21st June 2022
Description:
To keep her safe, he has to keep his hands off… But she has other ideas.When Aurora Bennett witnesses a murder by a ruthless Los Angeles crime boss, she ends up stuck in her apartment like she’s the one who committed a crime. Then a sexy new neighbor moves in, and he’s just the sort of bossy, broad-shouldered male that makes her crazy—in more ways than one.Devon Whitestone can’t tell his neighbor Aurora the truth—that he’s actually a personal bodyguard hired by her brother, the owner of Bennett Security. Rule number one: don’t touch.When a dangerous crime syndicate paints a target on Aurora’s back, Devon swoops in to protect her, even though she insists on making his job as difficult as possible. He won't let her out of his sight. But he’s definitely not supposed to like what he sees.
Review:
I grabbed this from the KU Library after looking for something a little romantic-suspense-y just for a change from the regular urban fantasy and contemporary reads.
It starts with Aurora Bennett at a party she had planned for her client with an Angels and Demons theme when she witnesses her clients murder at the hands of a organised gang. Squirrelled away by her older brother and his high tech security company she grows increasingly close to her bodyguard and though Devon tries to resist her, he eventually can't resist the pull of their attraction.
I struggled with this from early on, to be honest. It wasn't entirely pulling me in which is probably why it's taken me 12 days to read it. I don't know if it was the style or the storyline but I wasn't enjoying it as much as I expected to, though I did stick with it to finish it.
I did like Devon, though his martyr act got a little old towards the end. Aurora, I found to be a little annoying at times. If anything I was more interested in the secondary characters like what was going on between Devon's sister and the guy whose house they used for a little while (I forgot both of their names 😅).
I don't think I'll be picking up more of this series in the future.
at Tuesday, June 21, 2022