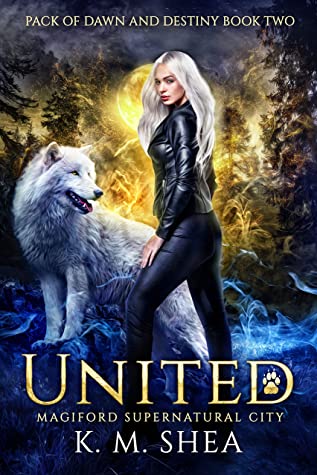 Book: United
Author: K.M. Shea
Series: Pack of Dawn and Destiny, #2
Genres: Urban Fantasy, Shapeshifters, Romance
Format: Kindle Unlimited
Publication Date: 14th January 2022
My Rating: 🌕🌕🌕🌕
Date Finished: 20th May 2022
Description:
A wolf is attacking the humans of Timber Ridge and changing them into werewolves—against their will.The change process is extremely dangerous and involves bloodshed. It isn’t something that happens by accident, which can only mean one thing.Someone is doing this on purpose.I’m going to find the rampaging sicko responsible for this outbreak, even if it means I have to master my new magic to stop them.Thankfully, Greyson—the Pack Alpha and the most powerful wolf in the Midwest—is always down for a hunt. The only problem is that I’m starting to find him attractive—which is the worst thing I could do. He’s got an incomplete mate bond, and since I’m a hunter, I could never be a wolf’s mate.That’s okay. I’m used to being alone. I'm a werewolf hunter, not part of the Pack. But that’s an awfully dangerous place to be when there is a rogue wolf on the loose.
Review:
I downloaded this and book 3 as soon as I'd finished book 1 because I had to see where things were going to go with the pack and the slow brewing thing between Pip and Greyson.
This starts with Pip out with her close wolf friends Aeric and Wyatt as they try to help her get a grip on her newly discovered magic but none of them have any idea how to use it. Later that day Pip is back home when a blip on her wolf-radar comes barreling towards her and it turns out it's a panicked newly turned wolf - one turned against their will. Pip, Greyson and the pack try to figure out who turned the wolf but another newly turned wolf makes themselves known in the town centre before they even start. Things are quickly going wrong and they are now more determined than ever to figure out who's behind it.
What a ride this one was. We seemed to have a lot going on; Pip and her magic; Greyson and his mate bond; and the person who was biting humans without consent. It all had me intrigued.
I jumped straight into this and devoured most of it in one day. I got invested in the blossoming friendship/romance between Greyson and Pip and also finding out who was turning the poor townspeople. I suspected the wrong person for a long time before we found out who it was and I was surprised. The ending had also caught me so I'm eager to start book 3. Off to start it now!
at Friday, May 20, 2022