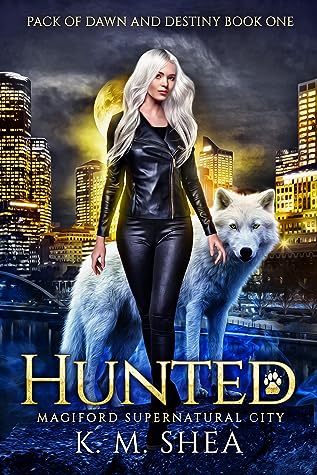 Book: Hunted
Author: K.M. Shea
Series: Pack of Dawn and Destiny, #1
Genres: Paranormal, Urban Fantasy, Shapeshifters, Romance
Format: Kindle Unlimited
Publication Date: 17th December 2021
My Rating: 🌕🌕🌕🌕
Date Finished: 17th May 2022
Description:
Ever feel like you don’t belong?Try being a hunter living with werewolves. I’m the definition of “doesn’t fit in”. I’m not Pack, but I’m not the enemy, either.I struggle to survive among werewolves who are stronger and faster than me, and are competitive enough to break a bone or two for the sake of “fun.”Greyson, their alpha, is the worst of them all.Blatantly relentless and twice as deadly, Greyson rules the Pack and expands its territory even though it’s already the largest in the region. I just wish he’d stop interfering with my life. He’s got enough trouble of his own with his incomplete mate bond, but he’s made it his hobby to tease and test me at every opportunity.Doesn’t my life sound fun?When wolves from surrounding packs start mindlessly attacking the innocent humans in our city, Timber Ridge, everything changes.Werewolves don’t turn feral without reason. Which means someone is making this happen, and they’re targeting our Pack.I don’t like where this is going, but how am I supposed to stop a feral wolf outbreak when I’m just one hunter? Can Greyson and I set aside our differences to see the Pack through this?
Review:
I've read a trilogy from this author before and enjoyed it, so I decided to pick this one up too which takes place in the same world.
This starts with hunter Pip - Phillipa - trying to avoid her wolf best friends' attempts to hug her as she walks to her job in the town centre and failing, only to run into a feral wolf from another pack outside her place of work and trying to distract him from the little girl he has his sights on. With a little help from her packs alpha they manage to take him out but the fact they killed him brings investigators to their doorstep and it isn't long before fingers start pointing at their pack as being the culprits for the drug that was in the feral wolfs system.
I do seem to enjoy this author's books. I fell into this one quickly and devoured a third of it in one sitting. I was just so intrigued by Pip and her powers and how she had the level of control she did over the wolves when she clearly isn't one. There was also the chemistry that was slowly flaring between herself and her adoptive packs Alpha, Greyson.
I wasn't entirely sure where this was going to go but it grabbed me and kept me reading throughout when it became clear that the investigators had a grudge. I was happy with how it played out and have already downloaded books 2 and 3. Will post my reviews of those soon.
at Tuesday, May 17, 2022