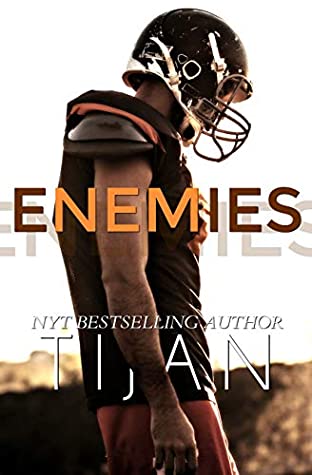 Book: Enemies
Author: Tijan
Genres: Contemporary, Romance, Enemies to Lovers, Sports
Format: Kindle Unlimited
Publication Date: 1st December 2019
My Rating: 🌕🌕🌕🌕🌜
Date Finished: 13th April 2022
Description:
Stone Reeves was my neighbor, and I've hated him since sixth grade.Gorgeous and charismatic, he became the town's football god, while I became the town's invisible girl.He went to a Division 1 school for football, while my father was fired by his father.His team won the National Championship, while my mother died the same day.He was a first round pick for the NFL ...... while I made the worst decision of my life.Now I'm in Texas trying to pick up the pieces of my life.But, Stone is here.Stone is everywhere.It doesn't matter that disaster has struck my life again.It doesn't matter that he's the one trying to console me.It doesn't matter that he's the nation's newest football obsession.Because for me, he always has been and always will be my enemy.
Review:
I read quite a few books by this author when New Adult was just becoming a thing back in 2013/14 but haven't really touched any of her books since but when I saw this in the KU Library I decided to download it and see if I still liked her work.
This starts with a rather harrowing prologue where our main girl is attacked by an unknown male. We then move forward and she is transferring colleges to focus on marine biology and moving into a room in a football party house. She tries to get on with her housemates and deal with her stepmother - who keeps calling - while trying to settle into the new location. When she's contacted out of the blue by her old best friend turned enemy - Stone Reeves - she tells him where to go but when he turns up on her doorstep with bad news she has no-one else to turn to in her time of need and things take an unexpected turn.
I was pulled into this so quickly. The anger and resentment she felt towards Stone made me think something good was going to come of it - eventually. They went through a lot of highs and lows together and it culminated in some rather all-consuming sex scenes.
I actually really enjoyed their story from using each other as an outlet for their anger at what had happened in the past to confessing feelings and that "epilogue after the epilogue" - which I loved! I even shed a few tears at times for the crap they'd endured.
I will most definitely be keeping an eye out for more of this authors books in the future.
at Wednesday, April 13, 2022