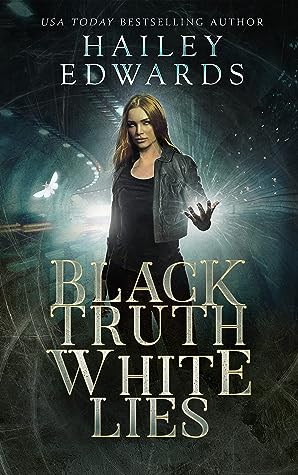 Book: Black Truth, White Lies
Author: Hailey Edwards
Series: Black Hat Bureau, #3
Genres: Urban Fantasy, Demons, Witches, Romance
Format: Kindle Unlimited
Publication Date: 7th December 2021
My Rating: 🌕🌕🌕🌕🌜
Date Finished: 20th April 2022
Description:
When one of Santa’s reindeer meets a grisly end during the annual A Downtown Dickens Christmas Festival, Rue realizes her enemies are closing in on her location, and Samford will pay the price.But when one creature turns into two, and two into three, and then three into four, Rue knows the problem is bigger than a singular threat to her new hometown. And that’s before a holiday shopper strolls into Hollis Apothecary claiming to be a long-lost relative. Of her father’s.As old loyalties are tested and new relationships threaten to unravel the fabric of her identity, Rue must choose either the family she was born into or the one she created for herself, and the losing side might not survive her decision.
Review:
I read the first two books in this series a few months back in January and enjoyed them so when I noticed this in the KU Library, I downloaded it.
This starts with Rue and co and her small town holding a type of festival where they're dressed in costumes and have a reindeer in town.  When the reindeer is brutally killed by a creature that had been dumped in their on purpose Rue and friends hunt down the creature and then try and find the perpetrator only to find a few more mysteries in regards to Rue's past and her parentage.
I do enjoy this band of characters and, of course, Rue's slow going relationship with Asa. That's one of the main reasons for me continuing with this series. It's really cute how the author has taken these two newbies to romance and wrote this sweet brewing romance where even Asa's demon is in "fascination" with Rue. I'm actually loving that bit. He's like this big oversized puppy who wants his hair touched all the time and to protect her from threats. Add in Colby and Clay, the girls and now Aeden and yeah. I'm very into this series.
I can't wait for more books in this series!
at Thursday, April 21, 2022