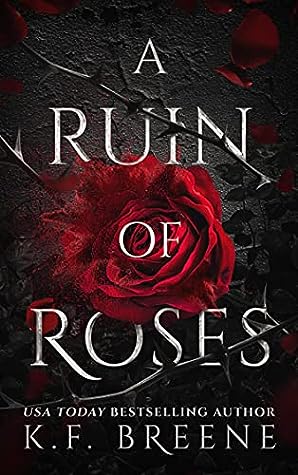 Book: A Ruin of Roses
Author: K.F. Breene
Series: Deliciously Dark Fairytales, #1
Genres: Fantasy, Romance, Retellings, Shapeshifters
Format: Kindle Unlimited
Publication Date: 8th October 2021
My Rating: 🌕🌕🌕🌕
Date Finished: 8th April 2022
Description:
I could save him, but he would ruin me.The beast.The creature that stalks the forbidden wood.The dragon prince.He has suffered a fate worse than death. We all have. A curse put upon us by the mad king.We are a kingdom locked in time. Shifters unable to feel our animals. Stuck here by a deal between the late king and a demon who seeks our destruction.The only one keeping this kingdom alive is Nyfain, the golden prince to a stolen throne. The last dragon shifter.He’s our hope.He’s my nightmare.When he catches me trespassing in the forbidden wood, he doesn’t punish me with death, as he’s entitled.He takes me, instead. Forces me back to the castle as his prisoner. Seeks to use me.Apparently, I can save him. I can save the whole forgotten kingdom, locked away by the demon king’s power.But it would mean taming the monster beneath his skin. It would mean giving myself to him.It would mean my ruin.
Review:
I do like me a good K.F. Breene book.
This starts with Finley waking from a nightmare where she almost came face to face with the Beast in the Forbidden Woods. She needs to collect some everlass to keep making her elixir - her attempt at an antidote to the curse that has been destroying her world for years - and the everlass plant is only found in the Forbidden Woods. Only she runs into trouble after her latest venture into the Wood and the Beast comes to take her for her crimes.
I was pulled into this pretty quickly. I wasn't sure where it was going to go after the beast took her but then it got interesting. We went to the castle and saw some crazy orgy going on - which I was not expecting! - and the beast asking one of the revellers to take her to her room in the tower before we got to know quite a bit of what had been happening in the castle and about the curse.
The romance aspect of this was rather erotic with some very detailed sex scenes going on between Finley and Nyfain. They also had a few touching moments here and there.
I've been struggling on how to word this for a few days now so I'm just going to post this. I've started book 2 already because I'm intrigued how they're going to overcome the curse and get their HEA.
at Sunday, April 10, 2022