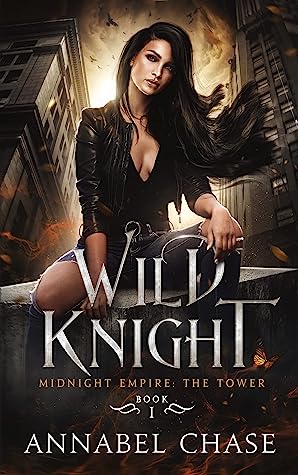 Book: Wild Knight
Author: Annabel Chase
Series: Midnight Empire: The Tower, #1
Genres: Urban Fantasy, Vampires, Paranormal, Romance
Format: Kindle Unlimited
Publication Date: 4th November 2021
My Rating: 🌕🌕🌕🌕
Date Finished: 19th March 2022
Description:
In a world of darkness where royal vampires are in charge, I spend my days working as a knight in the city formerly known as London. Instead of a lance and a horse, I rely on my trusty axe, Babe, and ride the occasional dragon. Every day new threats emerge that require a dash of magic and a dollop of attitude.Good thing I have both.Naturally danger comes with the territory. What no one knows is just how dangerous it is for me. If our vampire overlords discover what I am, they’ll execute me on the spot—no questions asked—which is why I avoid them at all costs.Until now.If only this one didn’t have a lethal reputation, a princely pedigree, and a quest that leads to more questions than answers. The heat between us doesn’t help matters.Unfortunately I can’t refuse a royal command, so I’m stuck until the job is complete.And even if the job doesn’t kill me, the truth just might.
Review:
This looked interesting, so I downloaded it from the KU Library.
This starts with London going into the underbelly of what was once her namesake, hunting down a man who stole something from her client. Upon retrieving the item, she heads back to her Knights' headquarters to tell them she's completed it when she's told a friend from another guild has another job for them. Only when she turns up she finds her client is a vampire - a species London does her best to avoid so they don't kill her on the spot - she tries her best to turn him down but he's dogged and keeps turning up wherever she is until she gives in.
I did like this one. I was more interested in the brewing attraction between London and Prince Callan, though, than the mystery she'd been asked to solve. There was just such a pull between them at times that you could tell something was happening there, something was beginning to build between them.
I did like some of the stuff that London and her Knights of Boudica got up to and the banter between them. I even grew to like Callan's brother.
I will definitely be reading more of this series very soon!
at Saturday, March 19, 2022