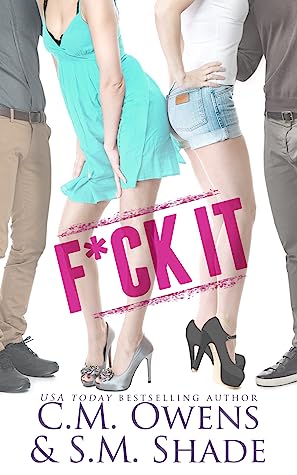 Book: F*ck It
Authors: S.M. Shade & C.M. Owens
Series: Yama Yama, #2
Genres: Contemporary, Romance, Funny
Format: Kindle Unlimited
Publication Date: 8th March 2022
My Rating: 🌕🌕🌕🌕🌘
Date Finished: 15th March 2022
Description:
What’s a woman supposed to do after watching her cheating ex's wedding implode?Apparently, the answer is get fired.And evicted.And move to another state to start over as an independent woman who would rather stick her tit in a beehive than get into another relationship.It’s fine. Really.The only thing messing with my new, badass single girl life is an encounter with my childhood crush.Fine, maybe I was the one who suggested some bedtime fun. What I didn’t do was invite him to come along on a holiday weekend. I have Kasha to thank for that.Now, I’m doing my best to hang onto my determination to stay single. It’s hard. Pun intended.With Kasha and Henley along, things were destined to be chaotic, but some things I didn't see coming.Like a garbage skunk with killer aim.A broken member that bears a resemblance to a crazy straw.And a man focused on winning my heart.
Review:
After loving the first book - which wasn't in a series at the time - 5 or so years ago and really loving it, as soon as I knew this was being released, I had to have it.
This starts with Sicily wanting to murder her new boss - Anderson - after he tells her her design is rubbish and needs to be redone, despite not having very long to come up with something. It doesn't help that she's always been attracted to him - her brothers best friend. The next chapter is from Lydia's POV and she's struggling to find a job after moving in with Sicily after Kasha and Roman suggest it. She ends up working as a gym teacher in a local elementary and bumps into a guy she used to crush on so hard.
I did enjoy this. Not quite as much as the previous book but I did laugh/snort a lot while reading this. Sicily and Anderson were my favourite couple of the two. They were just my sort of romance - office romance/enemies to lovers - and I eagerly awaited the chance to read their chapters. No offence to Lydia and Simon but they didn't hold as much appeal to me with their old crush trope.
One secondary character I feel I have to mention is Bobby Jo. That woman was totally bonkers and the reason behind most of my snorting with laughter. She knew so much about Sicily and just sex in general. It was crazy what she came out with at times and I couldn't decide whether to be embarrassed for the group when she integrated herself in it or to cheer her on.
If the authors decide to write another book together, I will be buying it!
at Wednesday, March 16, 2022