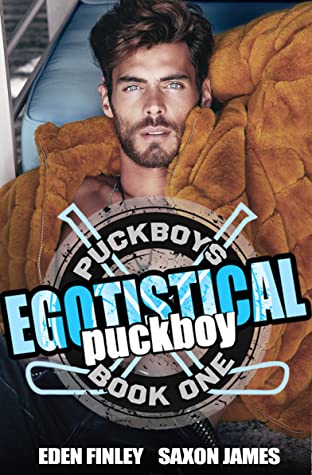 Book: Egotistical Puckboy
Authors: Eden Finley & Saxon James
Series: Puckboys, #1
Genres: MM Romance, Sports
Format: Kindle Unlimited
Publication Date: 10th February 2022
My Rating: 🌕🌕🌕🌕
Date Finished: 28th March 2022
Description:
EZRAPartying, dudes, and hockey. What more could a gay NHL player want?If it weren't for Anton Hayes, my life would be perfect.Not that he affects my life in any way. At all. That would imply I care what the winger from Philly thinks of me.Which I don't.Not even a one-night stand with him can thaw his misplaced animosity toward me.He says I'm the one with the ego, but he can talk. He rivals me for most egotistical puck boy in the league.I hate him as much as he hates me. Even if I crave a repeat.ANTONWhen it comes to hockey, I'm all about the game.I've worked for years to be one of the best in the league, and l've done it without splashing my orientation all over the tabloids.My hockey image is one I've carefully cultivated, and after one night with Ezra Palaszczuk, I risk it all.He's cocky, obnoxious, and has an ego bigger than Massachusetts. And okay, maybe he's the sexiest man I've ever known.We'll never get along. Not when we sleep together. Not even when my possessive streak awakens.That doesn't stop us from falling into bed together over and over again.
Review:
I grabbed this from the KU Library after it was recommended based on my enjoyment of Savage Rivals a while back.
It starts with Ezra and Anton on opposing ice hockey teams as they try and get through to the next round in the NHL but only one of their teams can win. Both teams go out on the town - one to celebrate, one to commiserate - when Ezra and Anton bump into each other and things take an unexpected turn when they hook up. Things turn a little more awkward when they end up playing on the same team.
I'm not really a sports fan unless it's the Olympics and I can cheer on my country so a lot of sports in my books are just foreign to me. Ice hockey pops up occasionally but I'm not familiar with it. I did like the team dynamics, though, with the bantering and pranks. They seem like a great bunch of guys and I'd enjoy reading more of this group of players.
As for the romance between Ezra and Anton; I did enjoy their enemies to lovers story. How their insults resulted in a steamy one night thing that both craved would happen again. And then it did - quite often - which quickly turned into them both wanting more. I did like them as a couple and how Anton was inspired by Ezra enough to want to publicly come out to everyone. I enjoyed their journey.
I liked this enough to read more of the series and a certain twosome that kept popping up in this one.
at Monday, March 28, 2022