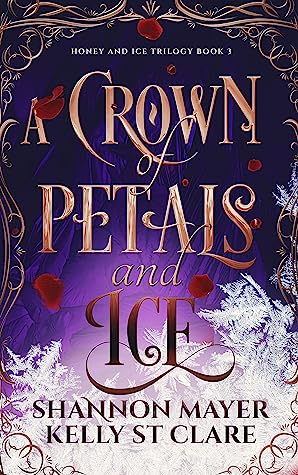 Book: A Crown of Petals and Ice
Authors: Shannon Mayer & Kelly St Clare
Series: Honey and Ice Trilogy, #3
Genres: Fantasy, Fae, Romance
Format: Kindle Unlimited
Publication Date: 17th January 2022
My Rating: 🌕🌕🌕🌕
Date Finished: 6th March 2022
Description:
Queen of the fae courts. Faced with an impossible battle. Destined to never be with the Unseelie I love.The magical tea has worn off. My eyes are wide open. And it’s with horror that I realize the fate of two realms rests on my shoulders after my mother’s ultimate sacrifice to trap Rubezahl in Underhill.Terrified humans clamoring for answers, whispered rumors from both Seelie and Unseelie, and a stepmother who seeks the throne for surprising reasons are the least of my troubles.Rubezahl has returned far sooner than I thought possible. I’m not ready. I can’t win this. And not only that…He has something crucial if we are to win. He’s taken something I cannot live without.The place of the final battle has been decided, and two armies will meet. Yet forces beyond my understanding must be satisfied first--old magics rise and demand their dues.There is no option but to race and decipher the puzzle to save the man I love, the friends more important to me than my own life, and humans and fae alike.Two realms.Only I can save them.We’re screwed.
Review:
I jumped straight into this after finishing the second book.
A little time has passed since Rubezahl was pushed into Underhill and Kallik is now Queen of the Seelie Court and has made Faolan King of the Unseelie. Kallik expected to have a while to hone her new magic before Ruby escaped the fae magic's home but he's back already and she must gather her friends and followers and take him down for good.
We didn't have time to breath in this one, from that first chapter where Kallik and Faolan are having their nightly meetings to finding out that Rubezahl was back and they needed to go and take him out. It was quite action packed and, at time, a little confusing but I'm glad it worked out the way it did in the end. I don't think I'd have been happy if anything different had happened.
I don't want to spoil it by going into too much detail but if you've read and enjoyed the previous two books, you should invest time to finish the series.
With how it ended, I know the authors are going to do more books in this world and I will probably read them when they're released.
at Sunday, March 06, 2022