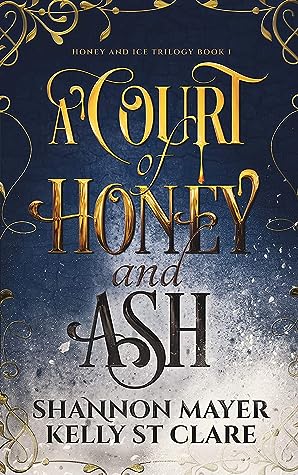 Book: A Court of Honey and Ash
Authors: Shannon Mayer & Kelly St Clare
Series: Honey and Ice Trilogy, #1
Genres: Fantasy, Fae, Romance
Format: Kindle Unlimited
Publication Date: 6th July 2021
My Rating: 🌕🌕🌕🌕
Date Finished: 1st March 2022
Description:
Orphaned. Trained to fight. Raised to fear the power of Underhill. Secretly in love with a man who doesn’t want me.I’m still just Alli, aka the half-human orphan fae, but my life is looking up for the first time. It only took me my whole 24 years.But when Underhill—the ancestral home of the fae—shatters, making it impossible for any fae to enter, I’m the only one who knows who did it.A secret that will be the death of me if I do nothing.A brutal madness spreads through the fae as they lose their connection to Underhill, and to save my people, my only choice is to leave all I have fought for and go on the run.Unless I figure out how the hell magic that has existed since the dawn of time was destroyed with a single touch, well, an entire life spent fighting to prove myself isn’t going to mean anything at all.I must find the answer to the riddle of Underhill’s shattering.Hunted by the very man I loved once upon a time.
Review:
I have enjoyed quite a few of Shannon Mayer's books and I've read a trilogy of Kelly St Clare's too so them writing together? Sign me up.
So this starts with Kallik - Alli - doing the last trial after eight years of training at Underhill. After successfully completing the trial she, and the others, must say a phrase in front of the Oracle only when Alli says the phrase the magic disappears and the Oracle blames her for it. Back in her normal homeland, Alli is trying to act normal despite what's happened but when it seems like everyone is gunning for her at the celebratory dinner later that night, she know she has to flee - if only to try and find out what really happened that day.
Fantasy is not necessarily a favourite genre of mine. I prefer the more paranormal side of things but I occasionally branch out and try something different.
So this was pretty action packed. I wasn't quite sure where it was going at the start. It had so many options for plot lines and I was intrigued. We slowly learnt things that had been hidden from the fae for one reason or another and I was pulled in.
As as romance reader I liked the thing she had going with Faolan - I had to look up how to say that by the way. It seemed forbidden coming from opposite sides of the fae but also like they were fated to be together. It had me intrigued, too. I also wish we'd seen more of them together.
This one has ended on a bit of a cliffhanger and I've gone and downloaded book 2, A Throne of Feathers and Bone, to see what happens next to Alli and her band of friends. Off to start it now.
at Tuesday, March 01, 2022