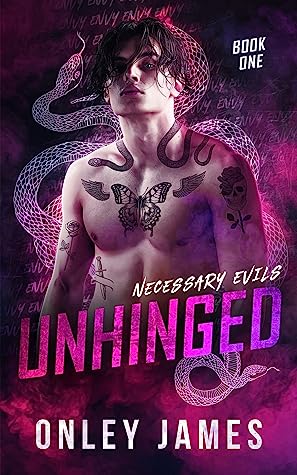 Book: Unhinged
Author: Onley James
Series: Necessary Evil, #1
Genres: MM Romance, Dark
Format: Kindle Unlimited
Publication Date: 29th June 2021
My Rating: 🌕🌕🌕
Date Finished: 20th February 2022
Description:
Adam Mulvaney lives a double life. By day, he’s the spoiled youngest son of an eccentric billionaire. By night, he’s an unrepentant killer, one of seven psychopaths raised to right the wrongs of a justice system that keeps failing.Noah Holt has spent years dreaming of vengeance for the death of his father, but when faced with his killer, he learns a daunting truth he can’t escape. His father was a monster.Unable to ignore his own surfacing memories, Noah embarks on a quest to find the truth about his childhood with the help of an unlikely ally: the very person who murdered his father. Since their confrontation, Adam is obsessed with Noah, and he wants to help him uncover the answers he seeks, however dark they may be.The two share a mutual attraction, but deep down, Noah knows Adam’s not like other boys. Adam can’t love. He wasn’t born that way. But he refuses to let Noah go, and Noah’s not sure he wants him to.Can Adam prove to Noah that passion, power, and protection are just as good as love?
Review:
The cover drew me in. I read the description, I wasn't sure I'd like it, so I didn't download it initially. Then when I was looking for more books to read during my 6 month subscription this one appeared again and I thought, why not?
This starts with a prologue of when Adam was about 6 years old. He had been brought up in an abusive house and was a bit disconnected from the rest of the world. He got adopted by Dr Mulvaney who had plans for the child and the others he'd taken in. Fast forward a lot of years and Adam and his brothers are murderers of the evil in society. When the son of one of his victims pulls a gun on him, Adam is equal parts wary and impressed by the young man and feels a strange connection to him. Showing Noah that his father was a vile man, Noah begins to remember stuff from his own childhood that begins to haunt him and he asks Adam to help him bring the men to justice.
It seems weird to cheer on the murderers in this but Adam and his brothers - though all pyscho/sociopaths - are all quite likeable. There's one scene where Adam gets drafted in to help his older brother with clean up after one of his kills and I actually laughed at their banter and the scene of the crime. It wasn't the only one. Craziness. Pure craziness.
The rest of the plot was Noah, Adam, and his family trying to figure out what really happened to Noah all those years ago and determined to bring the vile abusers to justice for the crimes committed against all the children they'd hurt. It was a little far fetched at times but it's a crazy idea anyway, so I'm not judging.
I'll admit I had trouble telling the brothers apart. All their names begin with A so apart from Adam, who we grew to know well in this, I struggled to remember much about the rest. That doesn't mean I didn't enjoy their banter, and I wouldn't mind continuing the series at some point in the future.
at Sunday, February 20, 2022