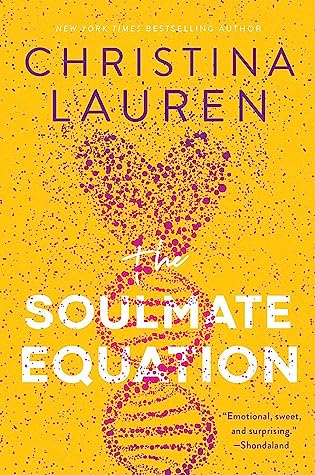 Book: The Soulmate Equation
Author: Christina Lauren
Genres: Romance, Contemporary
Format: Paperback
Publication Date: 5th August 2021
My Rating: 🌕🌕🌕🌕
Date Finished: 25th February 2022
Description:
Single mom Jess Davis is a data and statistics wizard, but no amount of number crunching can convince her to step back into the dating world. After all, her father was never around, her hard-partying mother disappeared when she was six, and her ex decided he wasn’t “father material” before her daughter was even born. Jess holds her loved ones close but working constantly to stay afloat is hard...and lonely.But then Jess hears about GeneticAlly, a buzzy new DNA-based matchmaking company that’s predicted to change dating forever. Finding a soulmate through DNA? The reliability of numbers: This Jess understands.At least she thought she did, until her test shows an unheard-of 98 percent compatibility with another subject in the database: GeneticAlly’s founder, Dr. River Peña. This is one number she can’t wrap her head around, because she already knows Dr. Peña. The stuck-up, stubborn man is without a doubt not her soulmate. But GeneticAlly has a proposition: Get ‘to know him and we’ll pay you. Jess—who is barely making ends meet—is in no position to turn it down, despite her skepticism about the project and her dislike for River. As the pair are dragged from one event to the next as the “Diamond” pairing that could launch GeneticAlly’s valuation sky-high, Jess begins to realize that there might be more to the scientist—and the science behind a soulmate—than she thought.
Review:
Grabbed this from the The Works, as well. I've read books by this author before and enjoyed them so I thought why not?
I seem to be interested in a lot of these science-y books at the minute. I have this. I bought The Love Hypothesis... Let's see how this one goes.
This starts with Jess in her favourite coffee shop with her best friend, Felicity/Fizzy, when another regular - called Americano by Jess for his drink choice - comes in and she tries to guess what he does for a living. When they find out that the place he works at has a new dating idea based on your DNA, they decide to go along and try it out. When reluctant Jess gets the best percentage match ever, she's sceptical to say the least, especially when she finds out who her match is. Mr Americano himself - Dr River Pena.
So I wasn't sure what to make of this at the start but the more I read, the more I saw the connection grow between Jess and River and I was hooked! I wanted these two people to get together so badly. Neither was expecting their attraction to be so off the charts and both were hesitant to even attempt a relationship but boy, was it good when they gave in.
I was wondering with all the sweet perfect-ness that was going on between them what the "thing" was going to be that caused a break-up or a rift between them. It did take me by surprise and I am very glad they overcame it because I was really shipping these two. I even had a bit of a cry!
I will be keeping my eyes open in the future for more books by Christina and Lauren.
at Saturday, February 26, 2022