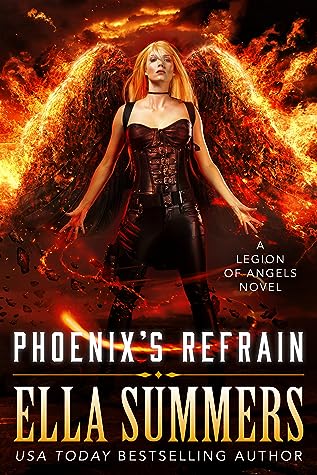 Book: Phoenix's Refrain
Author: Ella Summers
Series: Legion of Angels, #10
Genres: Urban Fantasy, Angels, Demons, Romance
Format: Kindle Unlimited
Publication Date: 1st August 2021
My Rating: 🌕🌕🌕
Date Finished: 13th February 2022
Description:
There are forces greater than gods or demons at work here.Leda Pandora, the Angel of Chaos, isn’t like other angels. She fights dirty, in ways totally unbecoming of a soldier in the Legion of Angels. She cracks jokes at the other angels, even when she should really keep her mouth shut. And she stubbornly insists on doing the right thing, even if it’s totally against the rules.Leda’s chaotic ways have helped her win many battles, but she’s going to need more than a healthy dose of chaos this time. Powerful forces have their eyes trained on her unborn child, a magical miracle who might just become the most powerful weapon ever conceived.To secure her daughter’s future, Leda will need to unravel schemes and unlock secrets buried deep in the past. Because ignorance is not bliss when deities play the game.
Review:
So it had been a while since I read the previous books in the series so I had forgotten quite a bit of what had happened in this series - but I did remember most of Leda and Nero's romance.
This starts with Leda and two of her sisters going into the Lost City, trying to find who has been sending her visions of the past and ends up running into someone she knows very well. Being pregnant Leda is told that she can't be on active duty so Nyx tasks her with making the Legion of Angels more accessible to the humans so she decides to hold an angel court in which she and others will settle disputes between people and other things. Only she meets someone who makes her begin to question what happened when she was born.
This one was crazy - or it felt like it anyway. There seemed to be at a lot going on and yet not much seemed to happen at the same time. There were a lot of memory scenes showing Leda's history and how she came to be where she is. It was a bit of a conundrum at times because the more you read of her history, the more you realised someone else was always pulling someone else's strings.
It actually got a bit too much for me towards the end and I skipped the ending of the memory. I wasn't particularly interested in how Leda was born for a reason and that her child would also be born for a reason.
The main part of the book, in my opinion, was them unearthing the Guardian stronghold and it took all of about a page or two towards the end of the book. I'm a bit disappointed by this instalment in the series.
There are a few editing issues in this - the same paragraphs are repeated one after another  - and the tense in places is wrong.
I'm debating whether to continue the series or not after this one.
at Monday, February 14, 2022