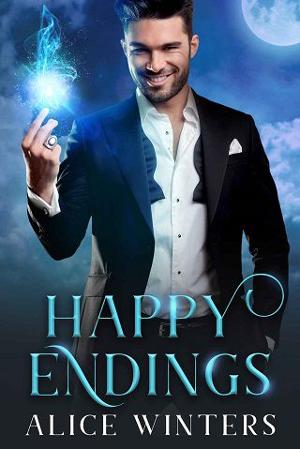 Book: Happy Endings
Author: Alice Winters
Series: Demon Magic, #1
Genres: Paranormal, MM Romance, Demons, Magic
Format: Kindle Unlimited
Publication Date: 12th December 2019
My Rating: 🌕🌕🌕🌕🌜
Date Finished: 3rd February 2022
Description:
Smart men never dabble with demons. I never claimed to be smart, but at least I’m powerful enough to control them. When I bound Havoc to me nearly three hundred years ago, I never realized how difficult he’d make my life, although “accidentally” lighting him on fire every now and then does bring a smile to my face.Havoc is handsome, mysterious, and somehow my closest companion, even if we don’t always get along. He’s more interested in bedding attractive women than protecting my life, which defeats the main reason a mage like me would have a demon. I even had to fight off swordsmen alone once because he was too busy betting on who’d survive.When fifteen people are found dead with messages from a long-extinct cult, Havoc and I are forced to face our past and sort through our differences. We start to realize that there’s something more to this relationship, something that has kept us by each other’s sides for so long. Maybe it took three hundred years to finally understand my feelings for Havoc and realize that I can’t imagine being with anyone but him. Havoc and I will do everything we can to stop the evil that is threatening the lives of the people I care about. Or destroy everything—we haven’t quite figured that out yet.
Review:
I've been on the hunt for MM Romance books that are also urban fantasy and after a bit of searching, I came across this one and decided it sounded good and I liked the cover. So here goes.
This starts with Milliant  - Miles - using his magic to give himself the appearance of an old lady when he feels two cops heading his way and acts the part of a massage parlour madam who offers them the services of the establishment until they run away. Fast forward a few days and they turn up again, only this time with another magic user who points him out as being in glamour and they explain why they're there. A man has been found murdered with a letter containing ancient text that Miles might be able to translate  and before long he finds himself realising that a cult from a long time ago may be being resurrected.
I got the humour in this one! I found myself chuckling at times at the antics of Miles and Havoc. They were always riling each other up and arguing I thought they were hilarious with their insults and stuff. But then they had the cute moments where they'd try to sacrifice themselves for the other. The relationship did change from an almost-enemies to lovers rather quickly but it fit in with how their relationship worked.
I really enjoyed this book and not just because of the romance - which was not typical at all. It showed a great connection between Miles and all those he was close to and had known for hundreds of years. Miles and Havoc were hilarious at times, not to mention Miles' two employees. It was quirky but in the best way.
This story did not get concluded though, and I would love to spend more time with this group of crazy people to see how Miles and co will bring down the bad guy from their past. I will definitely be picking that one up from the KU Library soon.
at Thursday, February 03, 2022