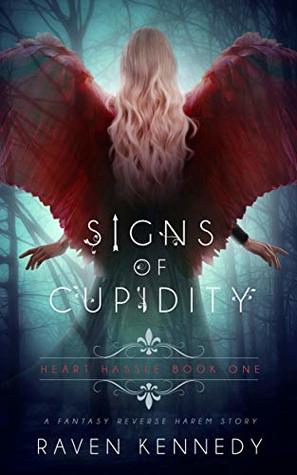 Book: Signs of Cupidity
Author: Raven Kennedy
Series: Heart Hassle, #1
Genres: Reverse Harem, Fae, Slow Burn
Format: Kindle Unlimited
Publication Date: 23rd August 2018
My Rating: 🌕🌕🌕
Date Finished: 22nd January 2022
Description:
You'd think that basically being in charge of love would be an epic job, right? Wrong. Sure, I can blow some Lust into people's faces and watch the show, but I can't actually participate. It gets old, trust me. Same goes for love. I can pass it out like sugar-free lollipops at a dentist's office, but I can't get any love for myself. It totally sucks.I used to consider myself a hopeless romantic, so why wouldn't I choose to become a cupid? Sounds like a good idea, right? Wrong again. They don't call us stupid cupids for nothing. I'm stuck in this never-ending afterlife where I'm invisible, lonely, and bitter as hell. And yeah, I'm probably responsible for some terrible matchmaking out there. Sorry, not sorry.All my bad cupid'ing might be why I was exiled from the human realm. You can only do so much before the cupid bosses get all huffy. Unfortunately, my bitterness carried over into the new realm, and then I attacked a fae prince with Love Arrows. Accidentally. Okay, not accidentally. But hey, he deserved it. What I didn't expect was for him to retaliate and hit my ass with some crazy magic mojo strong enough to push me into the physical realm. Whoa.That's right. This cupid just got a real body. And you know what that means...Now, it's my turn to get some. Love, I mean. Get your head out of the gutter. Wink, wink bitches.
Review:
Grabbed this from the KU Library.
It starts with our unnamed cupid really regretting her choice to become one after watching the same guy saying the same lines to different girls every night and them all falling for it. She's supposed to spread love and all she gets are lust filled nights that lead nowhere and she's getting fed up of it. She's becoming jaded. When she's summoned to "Cupidville" as she calls it, she's worried she's about to go poof and cease existing but ends up being sent to the fae realm instead. She's initially very excited to be in a new realm but things quickly go bad when she tries to get the Fae Prince to fall in love with his Princess, only for him to retaliate to her magic and push her into corporeality. She runs and manages to flee his land but he's after her.
I wasn't sure where this was going since it took until about 17% for her to become corporeal but once she found herself on that one island whose three inhabitants had caught her attention initially, I figured it out. They were going to be her love interests.
As it states, this is a slow burn reverse harem. Nothing sexual happens in this one, they share some flirty looks and innuendo but nobody sleeps with anybody. It is very slow burn.
Not too much happens in this one, to be honest. It's set things up nicely for the story to continue and I'm pretty sure the guys are starting to fall for the newly christened Emelle - her cupid number ML. And she is really beginning to care for the three very different guys.
There's also the mystery of why the Prince is trying to find her considering what she tried to do...?
I haven't decided whether I'll continue the series as of yet.
at Sunday, January 23, 2022