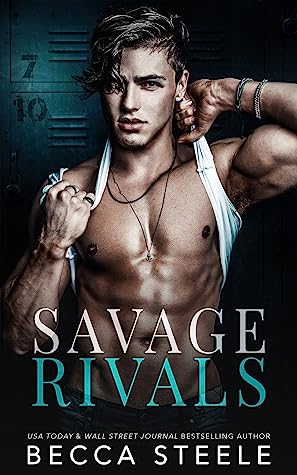 Book: Savage Rivals
Author: Becca Steele
Genres: MM Romance, Enemies to Lovers, Sports Romance
Format: Kindle Unlimited
Publication Date: 18th November 2021
My Rating: 🌕🌕🌕🌕🌘
Date Finished: 26th January 2022
Description:
Asher Henderson.Captain of the Highnam Academy football team, and the bane of my existence.As Alstone High’s team captain, I’ve been pitted against him from the beginning, but our conflict isn’t only reserved for the pitch.Everyone knows we’re enemies. From our first encounter, our rivalry has been escalating, spiralling out of control.Until one night when everything between us changed.He pushed me too far, and we crossed a line that should never have been crossed.Now, I can’t get him out of my head.Can we ever be more than rivals, or are there too many obstacles in our way?One thing I know for sure.Things between us will never be the same again.
Review:
This popped up on my Amazon page as a recommendation and the cover pulled me in, and then the description because I'm a sucker for Enemies to Lovers.
So this starts with Asher plotting to get revenge on Levi and the rivaling schools football team after they trashed their gym and ruined their kits - going beyond their usual snarky comments and pushing and shoving. Asher wants to fight Levi to put their rivalry to rest and show that he's the better guy but things take an unexpected turn when an unexpected kiss between them knocks them both on their arses, neither expecting it but liking it far too much.
To start with I wrongly assumed that this was going to be set in the US but I'm happy to say it's set in England so I actually understood the sport talk for a change. It's Football - not American Football - so that, too, made a nice change.
As I mentioned above, I do love a good enemies to lovers and this was most definitely that. Both guys were always trying to get one up on the other, always thinking of ways to annoy the other etc. It was crazy how much they thought about it. They were definitely enemies! But at the same time it seemed like more.
I enjoyed reading their slow progression from that single kiss to secret dates to finally telling their respective friends and family. It was cute. While some of the scenes between the two guys were rather hot! It was my favourite combination.
I also liked the little details the author had put in like their team number behind their names to tell us whose point of view we were currently reading. I probably won't forget 10 and 7 for a long time.
I'd like to read more books by this author in the future.
at Wednesday, January 26, 2022