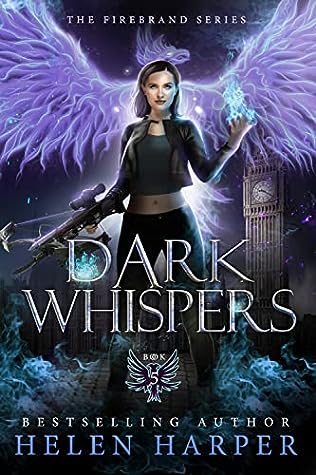 Book: Dark Whispers
Author: Helen Harper
Series: Firebrand, #5
Genres: Urban Fantasy, Vampires, Romance, Paranormal
Format: Kindle Unlimited
Publication Date: 2nd December 2021
My Rating: 🌕🌕🌕🌕
Date Finished: 30 January 2022
Description:
The Supernatural Summit is about to start at the DeVane Hotel in London. Vampires and werewolves, ghouls and gremlins, and pixies and druids have all come together to find better ways to get along with the human community and address the strict laws which govern their existence. It's a real opportunity to change the world for the better and I'm proud to be a part of it.But there are protestors camped outside the hotel and dangerous rumours circling about one of the delegates. When a dead body is discovered, I know it's only a matter of time before all hell breaks loose.I have to find the murderer. And I have to find them quickly.
Review:
It's been quite a while since I read the previous four books in this series but I remembered the romance that bloomed between Emam and Lukas a.k.a Lord Horvath and her power of rebirth.
So this starts with Emma in Trafalgar Square as a man has climbed one of the plinths and is declaring himself a vampire, and a dangerous one at that, making him fall under her - and Supe Squad - jurisdiction. Only when she gets closer, she realises he is definitely human and possibly has a mental illness. He mentions a name - the Chief - and the name pops up again later that day when an omega wolf turns up on her doorstep to warn her about him and the damage he's hoping to wreck at the Supe Summit in a few days time. When the man known as the Chief is found dead at the Summit, Emma is given 48 hours to solve the case before it is handed over to her human counterparts and she is determined to find the killer.
So I wasn't sure about this one at the start. It was a little slow until the summit started but then we had the murder and I was intrigued as to who had murdered the cult-like leader. He seemed like a bit of a strange one with his claims of vanquishing the evil beasts inside his followers. I had various suspects in mind but they all slowly got eliminated by Emma's investigation. And the culprit took me by surprise in the end.
This also focuses on Emma and Lukas' relationship and the strains it comes under when she has to treat almost everyone in the hotel as suspects in the case. As well as when she gets mortally wounded and decides to end her life so she can be reborn with her phoenix powers and be stronger and quicker once more.
I don't think this will be the last book as we still have a few things that haven't been fully resolved, in my opinion, but it did have a suitable ending for the Summit with humans feeling a lot more sympathetic to the supes of the world.
I look forward to reading more books and series' by this author.
at Sunday, January 30, 2022