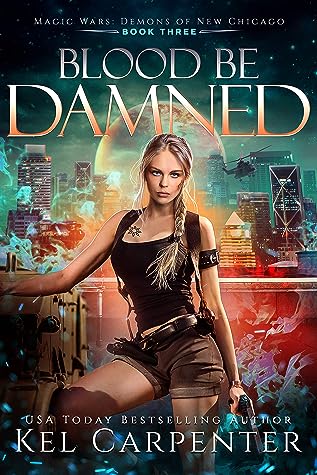 Book: Blood Be Damned
Author: Kel Carpenter
Series: Demons of New Chicago, #3
Genres: Urban Fantasy, Demons, Romance
Format: Kindle Unlimited
Publication Date: 28th May 2021
My Rating: 🌕🌕🌕🌕
Date Finished: 19th January 2022
Description:
When the Underworld burned, I thought that was the end. Turns out it was only the beginning.Lucifer’s death was a shot heard around the world. The sudden loss of magic turned the tides for the first time in over two decades.The humans are rallying. Rioting.It feels like the stirrings of war.As if that wasn’t enough, Bree isn’t the sister I remember—and her desire to return to Hell is creating more fires than I know how to put out.Things are changing. Lines are drawn. Everyone must choose a side.Even me.Sometimes the world needs a hero. In a city that’s already gone to hell in a hand basket, it might just need a demon.
Review:
So I read book 1 and 2 of this some time last year and was really pulled into the story so I'm looking forward to this one.
This starts with Piper in a bar, getting into a fight with an Alpha when her Demon lover, Ronan, makes an appearance and tries to talk some sense into her. She's on a downward spiral after rescuing her sister, Bree, only for her to want to go back to Hell. There's also a lot of unrest in the city after the death of Lucifer with humans trying to get rid of Supes, Supes taking out humans and demons on the brink of coming out of Hell. Piper needs to figure out how to fix things before her city really goes out of control.
Yeah, I'd forgotten quite a lot of what went down in the previous books other than Piper and Ronan and that he was a demon that had been summoned in the first book and that they ended up with some sort of connection.
Nevertheless, I enjoyed being back in New Chicago with them. Their romantic entanglement finally sorts itself out in this one but not before some ups and downs and errors from both of them.
As for the rest of the gang? I honestly didn't remember much about them but I did like the dynamics between them. They didn't always get along but they all protected those they classed as friends and it was nice to read about.
I thought this was going to be the last book for some reason but that ending has me intrigued about what's going to happen next with this group of people and I'm looking forward to reading more.
at Wednesday, January 19, 2022