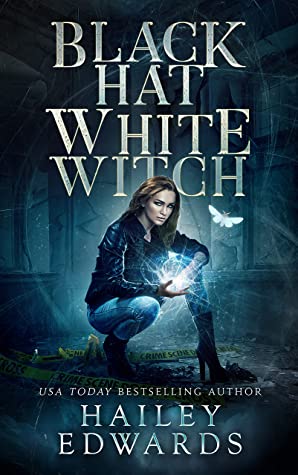 Book: Black Hat, White Witch
Author: Hailey Edwards
Series: Black Hate Bureau, #1
Genres: Urban Fantasy, Demons, Witches
Format: Kindle Unlimited
Publication Date: 28th June 2021
My Rating: 🌕🌕🌕🌕
Date Finished: 15th January 2022
Description:
Remember that old line about how the only way out of the organization is in a pine box?Well, Rue Hollis spent ten years thinking she had escaped the Black Hat Bureau, no coffin required.Then her former partner had to go and shatter the illusion by showing up on her doorstep with grim tidings. As much as Rue wants to kick him to the curb, she agrees to hear him out for old times’ sake, and what he says chills her to the bone.The Silver Stag was the most notorious paranormal serial killer in modern history, and Rue brought him down. Now a copycat has picked up where the Stag left off, and the Bureau wants her on the case. She beat the Stag once. They think she can do it again. But they don’t know she’s given up black magic, and she’s not about to tell them. White witches are prey, and Rue is the hunter, not the hunted. Always.But can she take down the protégé of the man who almost beat her at her black witch best?If she wants to keep her new town, her new home, her new life, then she has no choice but to find out.
Review:
I've been eyeing this one for a while. It doesn't focus on the usual paranormal tropes.
This starts with Rue heading into her shop to do some sort of inventory behind the counter when her two young employees get distracted by a handsome guy outside. When he heads inside her shop and asks for Rue, she starts panicking. No one is supposed to know where she is. They must be from her old job at the Black Hat Bureau and want her back. Heading home she meets up with Colby, her young friend of the last ten years and decide to meet up with the agents. They bring bad news. Rue's last job - taking down the killer known as the Silver Stag - appears to now have a copycat killer and they want her help to track him down.
So yeah, this one definitely came across as different. The BHB was a new concept to me and I kind of liked the idea of an FBI but specifically for the supernatural races.
I liked the mystery of the killer and who he could be. How he seemed to know what was going on all the time. It did seem well thought out and I was hooked on it.
I also really liked the friendship between Clay and Rue and Rue and Colby. You could see they had a long past and had a great camaraderie because of it with inside jokes and just knowing what the other was thinking without words. It felt really special.
And last but not least, the connection that was brewing through the entirety of the book between Rue and Asa. That last chapter explained a lot of the strange things that had been occurring between them and I am intrigued by the possible romance that will be blooming between these two.
I will definitely be reading more of this series.
at Sunday, January 16, 2022