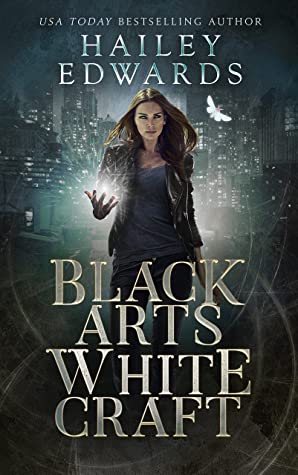 Book: Black Arts, White Craft
Author: Hailey Edwards
Series: Black Hat Bureau, #2
Genres: Urban Fantasy, Romance, Demons, Witches
Format: Kindle Unlimited
Publication Date: 1st September 2021
My Rating: 🌕🌕🌕🌕
Date Finished: 25th January 2022
Description:
After a black witch pitched a hissy fit in Hollis Apothecary, Rue got stuck cleaning up his mess. That was the easy part. Repairing the damage he inflicted on Camber and Arden? That makes Rue wish she could bring him back to life just to kill him again. Slower this time.While Rue is setting her new life back to rights, Clay and Asa are off working a case, but it soon becomes clear that they’ll need her help to catch the vicious creature preying on locals in a small Tennessee town. She’s got her hands full at home, but Rue has no choice. She must report for duty to honor her agreement with the director. Or else.What she discovers leads her deeper down the rabbit hole of Black Hat Bureau corruption and promises that, no matter how grim the past few weeks have been, the worst is yet to come.
Review:
I read the first one not long ago, and was very eager to jump back into the BHB universe - and see where Rue and Asa went next.
So this starts with Rue trying to put her shop back to normal after the events of the last book when her shop was wrecked and her employees abducted. The two young women are slowly going back to the carefree spirits they were before and Rue has to leave them in control of the shop again as she is called in to help on another case by the Black Hat Bureau. A wendigo that Clay and Asa killed has been reanimated and is killing at its owners request and they have to figure out who is behind it.
This one does focus a lot more on the romance that is slowly blooming between Rue and Asa than the case but I have no problem with that being a mostly romance reader. We learn a lot more about Asa and his demon form and I enjoyed both parts of him. The caring, almost shy guy and the possessive but charming demon who just wants Rue to pet his hair all the time.
I also enjoyed seeing more of her interaction with Clay. They are so close, they know what the other's thinking and when to just be there for the other. They're truly besties and I enjoyed reading more of their past and the resulting banter.
The investigation into the wendigo took an unexpected turn which I didn't see coming and the book that Rue came into possession of in the last book seems to be becoming sentient, which is kinda funny but kinda creepy, too.
I will definitely be reading more of this series in the future.
at Tuesday, January 25, 2022