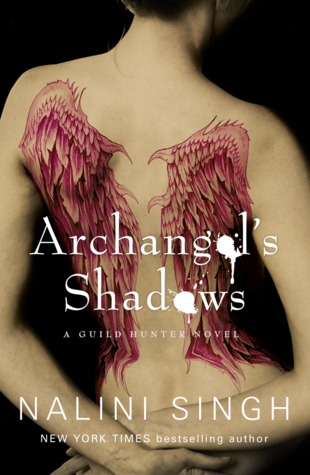 Book: Archangel's Shadow
Author: Nalini Singh
Series: Guild Hunter, #7
Genres: Paranormal, Angels, Romance, Vampires
Format: Paperback
Publication Date: 6th November 2014
My Rating: 🌕🌕🌕🌕
Date Finished: 3rd January 2022
Description:
In the wake of a brutal war, the archangel Raphael and his hunter consort, Elena, are dealing with the treacherously shifting tides of archangelic politics and the people of a battered but not broken city. The last thing their city needs is more death, especially not a death that bears the eerie signature of an insane enemy archangel who cannot - should not - be walking the streets. This hunt must be undertaken with stealth and without alerting their people. It must be handled by those who can become shadows themselves...Ash is a gifted tracker and a woman cursed with the ability to sense the secrets of anyone she touches. But there's one man she knows all too well without a single instant of skin contact: Janvier, the dangerously sexy Cajun vampire who has fascinated and infuriated her for years. Now, as they track down a merciless killer, their cat-and-mouse game of flirtation and provocation has turned into a profound one of the heart. And this time, it is Ash's secret, dark and terrible, that threatens to destroy them both.
Review:
It's been a while - 4 years - since I read the previous books in this series so I may have forgotten a lot of stuff...or I may remember more than just Raphael and Elena... We'll see soon enough.
This starts with a prologue involving Ashwini and Janvier during the battle against Lijuan. They both get injured but are determined the other should survive and escape. Fast forward a few weeks, the battle is over and they're trying to put New York back together after the damage done during it. Ashwini is on light duties while her injury heals and is sent to investigate a "mummified" dog found in the sewers - only to run into Janvier who was on his way up to check on her. Heading out together they investigate the dog and can't help feeling that the Angel they thought destroyed might not have disappeared after all.
I was as intrigued by the mystery of who was behind the dog and later, the girl, as I was about the romance that was brewing - and had been for a while - between Janvier and Ash. I had forgotten all the previous flirtation between the two but I did like their journey anyway. They just gelled so well together and I was cheering them on from pretty much the first page.
As for the mystery the two were determined to solve. I liked following them around New York as they went from club, to residences to the Tower and the Guild looking for answers. It was an interesting look into vamp life in the authors world and I liked the description. I would never have guessed who the bad guy turned out to be.
I also liked the descriptions of the other angels and vampires in this series. Aodhan and Illium are high on my list to read more of. Well, the Seven in general with their fun interactions would be great reading.
I'm very interested in Naasir. He's obviously some strange combination of vampire with his liquid silver hair, crazy way of thinking and death defying shenanigans. I'm intrigued about the kind of woman who will tame him. I'll definitely be keeping my eyes open for Archangel's Enigma.
at Monday, January 03, 2022