A Pound of Flesh - Sophie Jackson 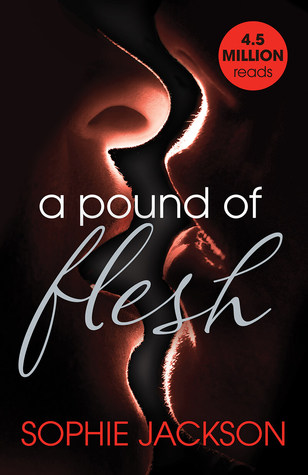 Book: A Pound of Flesh
Author: Sophie Jackson
Series: A Pound of Flesh, #1
Genres: Romance, Contemporary
Format: Kindle e-Book
Publication Date: 9th June 2015
My Rating: DNF @ 50%
Date Finished: 6th January 2022
Description:
Wes Carter: Dangerous, brooding and behind bars, Carter's emotional scars are as permanent as the ink on his skin.Kat Lane: Vibrant and gutsy, Kat chooses to become a prison tutor in tribute to her father whose murder haunts her.Although worlds apart, when their eyes meet, Carter and Kat's searing attraction is instant.As teacher and student, any relationship is against every rule. But although their love is forbidden, it won't be denied...
Review:
This is a book I've had on my Kindle for years. I've just checked and it's been there for five make that six years now. I tend to know that books I've put off for so long, I've put off for a reason. I generally don't enjoy them.
This starts with a prologue of Kat and her father being chased by a gang of men who proceed to beat her father to death while she is dragged away by someone and kept safe. Fast forward quite a few years and Kat is now a tutor to prisoners - finding the most fulfilment teaching criminals over privileged children. When Wes Carter ends up in one of her classes she cant help but be attracted to the hot-head with his knowledge of classic literature and poems but she fights it with everything. When Carters probation hearing comes around, Kat volunteers to continue teaching him outside the prison both in an effort to help him get released sooner and so that she can continue to trade views on the work she gives him. Only the attraction between them keeps flaring and they both know what could happen if they get found out.
It sounds more exciting that it turned out to be.
I was extremely bored reading this. The only scene I truly enjoyed up to the 50% mark was when Carter and Riley were playing basketball while in prison and Carter insulted his friend resulting in a crazy race around the grounds as he tried to avoid his friends retaliation. Now that bit I did enjoy. I was smiling like an idiot as the two bantered.
The rest of the story was just so slow moving. It's 400+ pages long and they're just about getting ready to cross the line have sex by the 50% mark. They flirted and stuff but it was definitely being dragged out.
And I think as soon as we began the tale and got to know Wes that he may have played some kind of role in that prologue. It was just that obvious.
I won't be continuing the series.
at Thursday, January 06, 2022