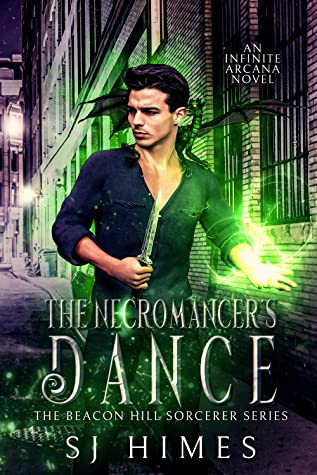 Book: The Necromancer's Dance
Author: S.J. Himes
Series: The Beacon Hill Sorcerer, #1
Genres: MM Romance, Urban Fantasy, Vampires
Format: Kindle e-Book
Publication Date: 25th February 2016
My Rating: 🌕🌕🌕🌕
Date Finished: 28th December 2021
Description:
In a world where magic is real and evil walks amongst humanity, a young sorcerer is beset upon by enemies, both old and new. Angelus Salvatore is the only necromancer in all of Boston, and his name is whispered warily by the undead and fellow sorcerers alike. He and his brother Isaac are the lone survivors of an attack by an army of the undead, in which Angel used a spell so powerful it forever marked his place in history. Now, years later, Angel struggles to balance his career as a teacher of the higher magical arts, his role as big brother, and a tenuous relationship with an Elder vampire from the local clan. When his brother’s boyfriend is used as a pawn in a mysterious plot to draw Angel out, Angel is once again pulled back into the old hostilities that fueled the Blood Wars and led to his family’s death.Leaning on others for help is something Angel cannot do, and while he searches for clues into who may be targeting him and his brother, Angel finds his heart steadily growing occupied with Simeon, Elder and vampire. Dealing with death magic and vampires on a daily basis may leave Angel jaded when it comes to life and staying that way, but the more time he spends fending off the ancient vampire’s attention and affections, the more he realizes he wants to give in.Can Angel find out who wants him dead, and keep his heart safe in the process? How can he fall for a vampire, when his whole family was torn apart by an army of the undead?Death stalks the streets of Boston’s historic Beacon Hill….and there is no one more suited to battle against death than a necromancer.
Review:
I grabbed this at a bargain 99p a week or so ago when its price dropped on Amazon because I love me some urban fantasy and I realised I hadn't really ever read a MM Urban Fantasy Romance.
This starts with Angel being summoned to the Vamp HQ to rescue his brothers friend who was caught red handed trying to steal something. Angel manages to figure out the issue and reminisces about first meeting Elder Simeon - who he has a bit of a crush on - and who has always treated him well and flirted. When he wakes up in bed with Simeon, he's confused and equally in heaven. Turns out Simeon has been in love with him for the last two years and has been patiently waiting for Angel to work out his own feelings. Simeon isn't sure how to feel, especially when an old friend is murdered by a vampire and left outside his house for him to find. It seems someone from his past wants him dead.
I actually really enjoyed this one. The initial meeting we see between Angel and Simeon, the looks they shared, you just knew that something was going to happen there. And then we get that scene where we went back to their first meeting and even then you could feel the attraction starting. It was really well written.
The intrigue of figuring out who was after Angel had me thinking from the start. I had no idea it would turn out to be that particular person but in a way, I'm glad it was.
I also feel like I should mention Eroch. He's not in the story until towards the end but I fell in love with the little guy.
I liked this enough to continue the series at some point.
at Tuesday, December 28, 2021