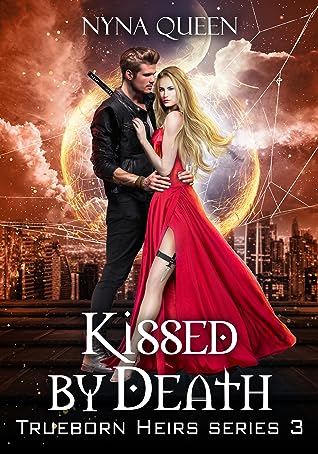 Book: Kissed by Death
Author: Nyna Queen
Series: Trueborn Heirs, #3
Genres: Fantasy, Shapeshifters, Romance
Format: Kindle e-Book
Publication Date: 20th August 2021
My Rating: 🌕🌕🌕
Date Finished: 3rd December 2021
Description:
A terrible secret. An impossible choice. And a love worth dying for…After the horrible disaster at the Summerball, Alexis Harper and her allies are running out of time. Not only has the murder messed up all their careful plans, but Alex is also threatened to become the focus of the investigations. In search of the missing pieces in this enigmatic puzzle, she and Darken embark on a perilous journey to an abandoned prison camp deep in the mountains — and make a discovery more shocking than anything they could have imagined. A discovery that, if revealed, will shake the country to its very foundations.At the same time, the Spider and the Forfeit find themselves at an emotional crossroads. At this point, it's all or nothing. But just as they reluctantly admit their feelings for each other, events force them apart and suddenly Alex is faced with a terrible choice: to run and save her own life or to stay and fight for the truth and the man she loves, even if it may cost her life.As Alex spins a crazy spider’s trap, one thing soon becomes clear—one way or another, she will end up being kissed by Death…
Review:
This starts straight after the events of the second with the death of the councilman and Alex finds herself being marched underground with an armed escort and she worries that her cover has been blown. Luckily it hasn't but Alex and Darken are still determined to figure out who was behind the attempted kidnapping of Darken's niece and nephew and end up uncovering a major conspiracy.
I have enjoyed reading this series but this one seemed super long and I was bored in places with all the internal dialogue and detailed description of everything the author was throwing out. I did skip entire paragraphs at one point because it was just stuff that didn't interest me. I wanted the bones of it, not the fleshed out parts.
The main thing I wanted was I for them to out the bad guys and get together romantically. It did happen in the end it just took a windy route to get there. I won't go into detail because the author threw a few curve balls in there to throw us off and it would totally spoil it.
This author needs to give this series a good editing. It's a good, cleverly thought out trilogy but it is in need of a good read through so the tiny spelling mistakes and stuff can be erased.
at Saturday, December 04, 2021