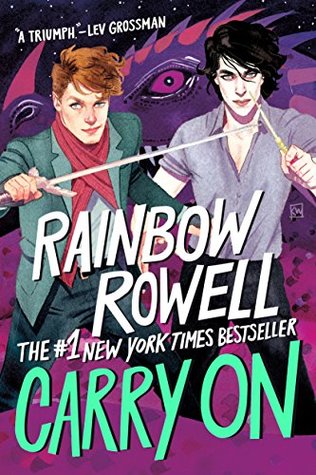 Book: Carry On
Author: Rainbow Rowell
Series: Simon Snow, #1
Genres: Fantasy, LGBTQ, Romance, Mystery
Format: Kindle e-Book
Publication Date: 6th October 2015
My Rating: 🌕🌕🌕
Date Finished: 8th November 2021
Description:
Simon Snow is the worst Chosen One who's ever been chosen.That's what his roommate, Baz, says. And Baz might be evil and a vampire and a complete git, but he's probably right.Half the time, Simon can't even make his wand work, and the other half, he starts something on fire. His mentor's avoiding him, his girlfriend broke up with him, and there's a magic-eating monster running around, wearing Simon's face. Baz would be having a field day with all this, if he were here -- it's their last year at the Watford School of Magicks, and Simon's infuriating nemesis didn't even bother to show up.
Review:
So I'll be honest. I skipped the parts of this that the author created for "Fangirl". I was more interested in the romance going on between Cath and Levi so this is all pretty new to me.
This starts with Simon heading back to school for his final year at Watford before he finally plucks up the courage to take down the Humdrum - a strange being that wears Simon's face and is trying to take Simon out before Simon does the same to him - and maybe he'll have a few allies to help.
I wasn't sure how to feel reading this at the start. I felt like I'd missed a lot of stuff and it niggled at me. But then the constant switching between everyone's POV's had me intrigued for various reasons.
The questions kept mounting the more I read until I got a little distracted by the romance that was blooming between our characters. It did sort of come out of nowhere, in a way, since Simon has never even thought of Baz in that way but, oh, well, it was kinda cute.
I had so many thoughts reading this and I couldn't even post half of them on Goodreads because the site was down! Ugh.
So you figure things out the more you read but I still feel like I have no idea what happened to Lucy. A lot of other things get resolved and we see a bit of Simon and Baz as a couple but not enough for my liking.
I haven't decided if I'll read more of the series yet.
at Wednesday, December 08, 2021