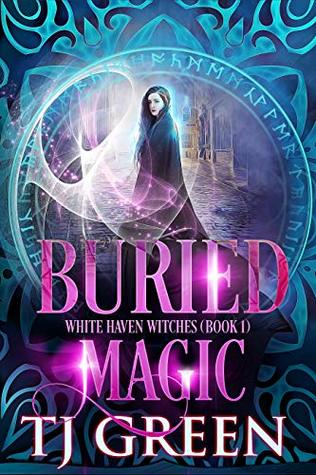 Book: Buried Magic
Author: T.J. Green
Series: White Haven Witches, #1
Genres: Fantasy, Witches, Demons
Format: Kindle e-Book
Publication Date: 22nd November 2018
My Rating: 🌕🌕
Date Finished: 22nd December 2021
Description:
Witchcraft, dark secrets, and demons. No one is safe in White Haven.White Haven has a history of witchcraft, but the locals don't know that there are real witches living among them, and Avery is one of them.When she receives an ominous premonition, a rune covered box, and an intriguing letter, all hinting at the mysterious past of her hometown, perched on the Cornish coast, Avery realises that the witches are missing a vital part of their history.Five missing grimoires.And when the annoying, but very handsome, Alex Bonneville, shares the same premonition, they know that trouble's coming.Against her better judgement, Avery teams up with the other witches to uncover the truth.Unfortunately, someone will do anything to stop them.Now is the time to uncover the past.Now is the time to reclaim their heritage.And they'll risk everything to do it.
Review:
This starts with Avery having a premonition of someone dark coming to her small Cornish town, someone who means her harm. Fellow witch Alex turns up at 2am having had the same vision and they decide to meet with the other three witches in town to discuss what they've seen. An elderly resident has recently died, leaving Avery a big box that's been sealed with magic and upon the group opening it, they realise that they have very old grimoires hidden around the town by their relatives centuries ago and try to hunt them out, only to run into trouble.
I wasn't sure about this one. It had a bit of a slow start. I wasn't really pulled into the story until near the half way point and even then it was a lacklustre interest. I continued thinking that something might actually happen...and I did get intrigued somewhere around the 70% mark but by the end, nothing had been resolved. There was no actual ending to this story, it just cut off rather suddenly.
I don't feel we got to know the characters well enough to care about them, so when something happened to one of them I didn't particularly care. The other characters didn't seem to care that much either, really.
I liked the journey around the little Cornish town but I missed a lot of description - and I generally skip a lot of paragraphs about it - in this.
It was a stripped back version of an urban fantasy and my issue was the plot. I won't be continuing the series.
at Thursday, December 23, 2021