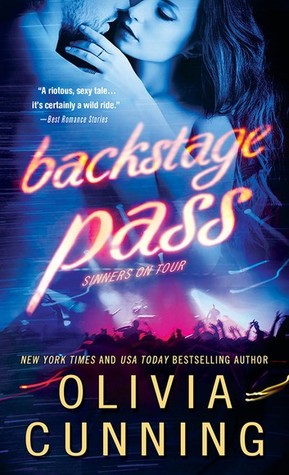 Book: Backstage Pass
Author: Olivia Cunning
Series: Sinners on Tour, #1
Genres: Contemporary, Rockstars, Erotica, Romance
Format: Kindle e-Book
Publication Date: 1st October 2010
My Rating: 🌕🌕🌕🌜
Date Finished: 25th December 2021
Description:
Five stunning guys, one hot woman, and a feverish romance...For him, life is all music and no play...When Brian Sinclair, lead songwriter and guitarist of the hottest metal band on the scene, loses his creative spark, it will take nights of downright sinful passion to release his pent-up genius...She's the one to call the tune...When sexy psychologist Myrna Evans goes on tour with the Sinners, every boy in the band tries to seduce her. But Brian is the only one she wants to get her hands on...Then the two lovers' wildly shocking behavior sparks the whole band to new heights of glory... and sin...
Review:
So I'm ashamed to say I've had this on my Kindle for 5 years. I wasn't sure if I'd enjoy it but I've been pulled in hook, line and sinker so far.
This starts with Myrna leaving a lecture she's just given at some conference and seeing the members of her favourite rock band sat bored and drinking in the lobby, being glared at by the stuffy conference goers. Myrna is a psychologist whose main study is human sexuality and the band members and their songs are big hits with her. She heads over and introduces herself and all the guys instantly start flirting but it's the bands guitarist that she can't help but be drawn to, Brian Sinclair.
I feel the first thing to mention was the amount of sex Brian and Myrna had. It was pretty ridiculous. Every opportunity to have sex, they were doing it. I think it started to ease off about the 65-70% mark when I'd already started skipping them anyway.
I did really enjoy the first few chapters of this. I was pulled in hook, line and sinker. And then it was so full of sex - some of it weirdly kinky - that my interest waned quite a lot. I focus on the relationship progression and although sex can help with that, this was just too much. The last third was more relationship focused but I still wasn't entirely feeling it.
I really liked Brian. He was the typical rock star but he was also a total heart-on-his-sleeve softy. That was what really drew me to him. Myrna...well, the fact she held herself back from his sweet openness made me want to punch her a few times. It just seemed so mean at times.
As much as I grew to care for the rest of the band, I'm not sure if I'm interested enough in them to continue the series.
at Saturday, December 25, 2021