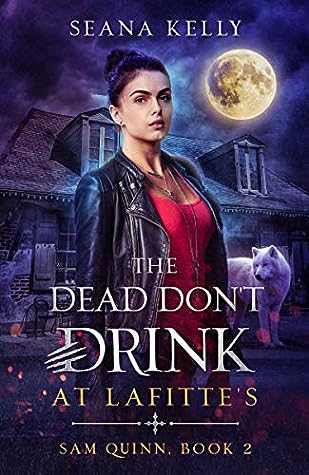 Book: The Dead Don't Drink at Lafitte's
Author: Seana Kelly
Series: Sam Quinn, #2
Genres: Urban Fantasy, Shapeshifters, Vampires, Romance
Format: e-Book
Publication Date: 13th April 2021
My Rating: 🌕🌕🌕🌕
Date Finished: 10th November 2021
Description:
I’m Sam Quinn, the werewolf book nerd owner of the Slaughtered Lamb Bookstore and Bar. Things have been busy lately. While the near-constant attempts on my life have ceased, I now have a vampire gentleman caller. I’ve been living with Clive and the rest of his vampires for a few weeks while the Slaughtered Lamb is being rebuilt. It’s going about as well as you’d expect.My mother was a wicche and long dormant abilities are starting to make themselves known. If I’d had a choice, necromancy wouldn’t have been my top pick, but it’s starting to come in handy. A ghost warns me someone is coming to kill Clive. When I rush back to the nocturne, I find vamps from New Orleans readying an attack. One of the benefits of vampires looking down on werewolves is no one expects much of me. They don’t expect it right up until I take their heads.Now, Clive and I are setting out for New Orleans to take the fight back to the source. Vampires are masters of the long game. Revenge plots are often decades, if not centuries, in the making. We came expecting one enemy, but quickly learn we have darker forces scheming against us. Good thing I’m the secret weapon they never see coming
Review:
I bought this from Google Play a little after finishing the first book, since I enjoyed it so much.
This starts with Sam seeing a ghost outside her bar who warns her that someone is in immediate danger and she runs home thinking it's her lover Clive who's in harms way. Turns out vampires from New Orleans have been sent by their master to take Clive out in an effort to take his territory. Of course Clive doesn't take the slight well and flies across the country with his closest vampires and Sam and they set out on a course to show the vampires there that he is not weak.
I do like these characters and this series. I wasn't as pulled into this as the first one but I do like the continuation and development of the relationship between Sam and Clive. They are really great together and I love how Clive is starting to see that Sam is very good at looking out for herself and doesn't always need his help. I also grew to really like Russell and Godfrey, especially when Sam used her gift to see inside their heads.
I enjoyed the trip through New Orleans - it's a city I've never been to but would like to - but I did miss being inside Sam's bar and bookstore. I know it's having a rebuild after the events of the first but I grew to really like the place with it's amazing location and the graphic descriptions of it.
I will definitely be reading more of this series in the future because Sam's also been growing as a character and finding all these new skills ans abilities she didn't know she had and it is very intriguing where it's going to go next.
at Wednesday, November 10, 2021