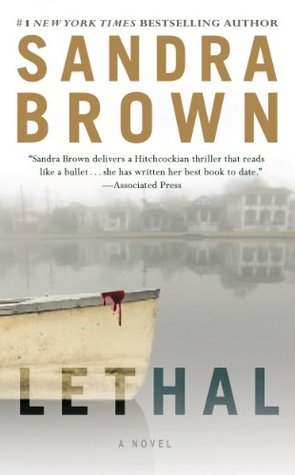 Book: Lethal
Author Sandra Brown
Genres: Romantic Suspense, Intrigue
Format: Kindle e-Book
Publication Date: 20th September 2011
My Rating: 🌕🌕🌕🌕
Date Finished: 13th November 2021
Description:
When her four year old daughter informs her a sick man is in their yard, Honor Gillette rushes out to help him. But that "sick" man turns out to be Lee Coburn, the man accused of murdering seven people the night before. Dangerous, desperate, and armed, he promises Honor that she and her daughter won't be hurt as long as she does everything he asks. She has no choice but to accept him at his word.But Honor soon discovers that even those close to her can't be trusted. Coburn claims that her beloved late husband possessed something extremely valuable that places Honor and her daughter in grave danger. Coburn is there to retrieve it -- at any cost. From FBI offices in Washington, D.C., to a rundown shrimp boat in coastal Louisiana, Coburn and Honor run for their lives from the very people sworn to protect them, and unravel a web of corruption and depravity that threatens not only them, but the fabric of our society.
Review:
I've had this on my Kindle for five years - and it's my longest sitting e-book that I haven't read yet - so here goes.
This starts with Honor baking some things for her father in laws birthday when her daughter tells her there's a sick man in their garden. Honor is wary but runs out to try and help only for the man to pull a gun on her. That's when Hope recognises him from the news as the man accused of multiple murders last night. Scared, she does as he asks and it's only the following day that he begins to reveal things about himself and why he's there.
I was hooked from pretty early on. I think that for a while I forgot that this was a romantic suspense because I honestly thought that something bad was going to happen to Honor in that first chapter. I had to go back and read the description again when I got to the end of it because I just wasn't sure where it was heading. And then I was intrigued...
It's written in such as way as to leave you guessing for a long time on who the good guys are and who are the bad ones. The continuous swapping between the seven or so characters POV's just as something big is about to happen had me screeching at times. It was making me wait another 20 or so pages to find out the fate of someone! Argh!
I swear this book has had the most status updates out of me on Goodreads than any other lately. I was always showing my annoyance at the swap between POV's and the constant change of allegiance. I truly had no idea who was bad and it drove me crazy. The bad guy did take me a little by surprise and I felt bad when some people got killed but I have enjoyed this.
I will definitely be keeping my eyes open for more books by this author.
at Saturday, November 13, 2021