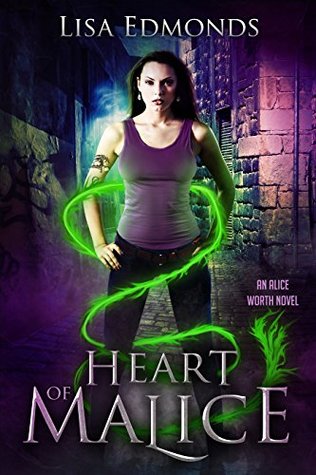 Book: Heart of Malice
Author: Lisa Edmonds
Series: Alice Worth, #1
Genres: Urban Fantasy, Paranormal, Witches, Vampires, Shapeshifters, Magic
Format: Kindle e-Book
Publication Date: 27th June 2017
My Rating: 🌕🌕🌕🌜
Date Finished: 22nd November 2021
Description:
The first time Moses Murphy’s granddaughter killed on his orders, she was six years old.For twenty years, she was a prisoner of an organized crime syndicate, forced to use her magic to make Moses the most powerful and feared man on the East Coast. To escape his cruelty, she faked her own death and started a new life as Alice Worth. As a private investigator specializing in cases involving the supernatural, Alice walks a precarious line between atoning for the sins of her grandfather’s cabal and keeping her true identity hidden.Hired to investigate the disappearance of a mysterious object of power, Alice enlists the help of Malcolm, a ghost running from a past as nightmarish as her own. It soon becomes clear the missing object was taken by someone with a dangerous secret and an unknown agenda. When her client is kidnapped, Alice must find her and the object of power before a vengeful killer destroys the city and slaughters thousands—starting with Alice.
Review:
I grabbed this for 99p a little while ago after having it on my wish list for months.
It starts with Alice in a bar being picked up by a half demon who it turns out has been abducting young girls and Alice has been tasked with taking him down. She's a blood mage on the run from her grandfather and is trying to stay out of everyone's way while taking on jobs to earn a living. When she's asked to investigate some missing objects she finds herself drawn into a mystery that almost costs her her life.
I'm not sure with this one.
I was reading it because I wanted to know what this case involving these missing objects was going to be about but then we had the romance with Sean and that bit got my attention more than the case did. And then it all got turned on its head with a little help from the local vampires and I wasn't sure what to make of things anymore.
The case did take me a little by surprise when Alice couldn't find the mystery person who had access to her clients library and then we found out who it was and what they intended to do... This person was not messing around.
The vampire aspect also has me intrigued now. If what Alice believes is true then the vampire is a very sneaky guy and I would love to see her take him down. I also hope she can keep under her grandfathers radar and that she has a happy relationship with Sean. So yeah, I may have to continue the series.
at Tuesday, November 23, 2021