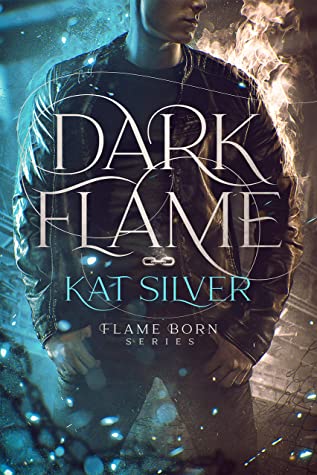 Book: Dark Flame
Author: Kat Silver
Series:Flame Born, #1
Genres: MM Romance, Urban Fantasy, Vampires, Witches, Shapeshifters
Format: Kindle e-Book
Publication Date: 6th February 2021
My Rating: 🌕🌕🌕🌕🌜
Date Finished: 23rd November 2021
Description:
"I know who you are because you belong to me. You were born to be mine." ~ Prince Alexei VasilievHaunted by the death of his parents, Michael Blakeley wants answers. The twenty-six-year-old martial artist seeks their killer, but he also wants to know why electronics short out at his touch, and why his libido is a raging fire.So when a group of soldiers calling themselves Guardians rescue him from a back alley ambush and claim to have the answers he needs, he agrees to go with them. Especially when they tell him the attackers were vampires. But nothing in this supernatural underworld is as it seems, and when the silver-eyed commander cages him instead, Michael's answers slip further away.Can Michael find safety from the vampire prince who claims him? Can he escape the dark destiny he discovers is written into his blood? And will he break the chains of the commander who keeps him captive? The one man he has no desire to leave?Dark Flame is the first pulse-pounding book in the Flame Born LGBT urban fantasy series. If you like enemies to lovers, shifters, sexy vampire princes, and scorching heat, you'll love this smoldering tale of bloodlust and magic. There is content some readers may find distressing. Meant for mature audiences.
Review:
I honestly didn't know what to expect with this one but it sounded good.
It starts with Michael out at his favourite bar when he's approached by a tall Scandinavian looking man who claims he's there to talk to him. Michael ignores him and is pulled onto the dance floor by a pretty woman who tries to lure him outside and into a trap before he's rescued by the tall man and a small crew who ferry him to safety and explain that he's special. He has what's known as the Flame, a power that allows all supernatural beings to live, and for some reason Michael has caught the attention of the Vampire Prince who wants to claim him as his own.
So yeah, I was confused as to who the romantic interest would be in this. The dashing vampire Prince who did sound rather seductive in those first fight scenes where we first meet him or the commander who calms Michael's Flame with just a touch? Colour me intrigued.
I read this in a day I was that into it! The story was well thought out with betrayal and deception not uncommon. I liked the story line with the vampires against the Guardians as they fought to either protect or control the Flame and the people who wield it.
The romance was done in such a way that I was hooked on it. It wasn't the main part of the story but it took up a big chunk of what was going on. A sort of will they, wont they and almost happy squeals when they finally just gave in.
There's still so much that hasn't been explained yet and I am so interested in where this series is going to go that I will definitely be reading more of it when it's released and I can't wait!
at Wednesday, November 24, 2021