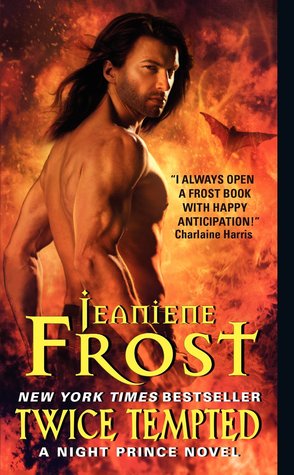 Book: Twice Tempted
Author: Jeaniene Frost
Series: Night Prince, #2
Genres: Urban Fantasy, Romance, Vampires
Format: e-Book
Publication Date: 26th March 2013
My Rating: 🌕🌕🌕🌕
Date Finished: 27th October 2021
Description:
Dating the Prince of Darkness has its challenges...Leila's psychic abilities have been failing her, and now she isn't sure what the future holds. If that weren't enough, her lover, Vlad, has been acting distant. Though Leila is a mere mortal, she's also a modern woman who refuses to accept the cold shoulder treatment forever–especially from the darkly handsome vampire who still won't admit that he loves her.Like choosing between eternal love and a loveless eternity...Soon circumstances send Leila back to the carnival circuit, where tragedy strikes. And when she finds herself in the crosshairs of a killer who may be closer than she realizes, Leila must decide who to trust– the fiery vampire who arouses her passions like no other or the tortured knight who longs to be more than a friend? With danger stalking her every step of the way, all it takes is one wrong move to damn her for eternity.
Review:
It's been a while since I read the first book in this series - 5 years! - but I remember enough to jump straight into this one.
So this starts with Leila sitting down for a formal meal with Vlad and other important vampires and him offering her a ring - one offered to every other member of his House - only Leila was hoping for an engagement ring and a declaration of love. In her disappointment and anger she decides to leave Vlad and go and rejoin Marty on the carny circuit, only for an explosion to take out the trailer they were travelling in and finding out it was meant for her. Leila has no idea who she can trust anymore but it isn't long until she's back under Vlad's protection.
I'll admit I was a little worried for a while when Vlad and Leila went their separate ways but it all worked out in the end. It was a bit of a roller coaster of emotions from the beginning but I'm glad to say that Vlad redeemed himself big time. And even Leila began to see how wrong she'd gotten things in regards to her Dark Prince.
I'm not going to go into more details because that would totally spoil this one. I've already bought book 3 and 4 and I'm off to start the next book after that sudden ending! I need to know what happens next.
at Wednesday, October 27, 2021