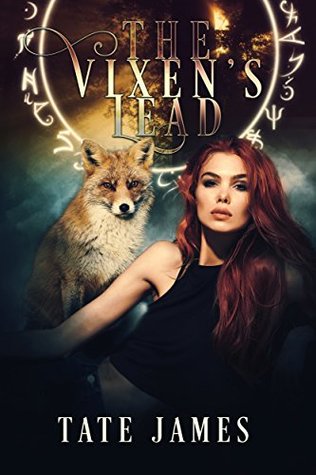 Book: The Vixen's Lead
Author: Tate James
Series: Kit Davenport, #1
Genres: Reverse Harem, Urban Fantasy
Format: Kindle e-Book
Publication Date: 19th September 2017
My Rating: 🌕🌕🌕
Date Finished: 18th October 2021
Description:
I want vengeance so badly that I can almost taste it. It's all I've ever wanted. So, I did what anyone in my unique position would do. I slapped on a secret identity and became an internationally renowned thief, known as The Fox. Nobody knows me. Nobody can catch me.Or so I thought...It turns out; I have what they want. Special abilities. And trust me, these abilities are coveted--and dangerous. Now, I don't know who to trust or where to go. Peril lurks on every corner as I try to uncover my past and origin. Teaming up with unlikely allies may be my only chance at survival or my biggest mistake. Only time will tell.I'm Kit Davenport and this is only the beginning.
Review:
I bought this a little while ago because the description had me intrigued.
This starts with Kit out on a mission to steal something and leaving behind her calling card of a small vixen - for her namesake and alias, The Fox. The next day she's talking with her best friend and tech guru about the mission when they realise that what they stole has a tracker and in a panic, Kit drowns it in a drink not realising until too late that it will draw attention to their location. When she suddenly starts meeting new random people in her small town she's wary but it's only when she's almost abducted that she realises how close to home the problem may be.
I'll admit it took a while for me to get into this. I was on the verge of giving up on it when it suddenly got a little interesting with Kit's abduction. Everything kicked into high gear for a little while.
I didn't realise that the main story arc was going to stretch across all of the series. I assumed that we'd have some definite answers by the end and I feel like we didn't really learn anything truly helpful.
As for the romance/reverse harem aspect. I wasn't entirely pulled into it. She's slept with two of the five guys by the end of this and not with the one guy I expected her to - and who I would have understood her sleeping with. There is an appeal to them all, in one way or another, but I was definitely shipping her with this particular guy.
I'm not sure if I'll be continuing the series.
at Tuesday, October 19, 2021