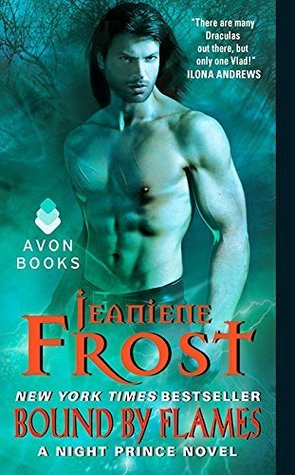 Book: Bound by Flames:
Author: Jeaniene Frost
Series: Night Prince, #3
Genres: Urban Fantasy, Romance, Vampires
Format: e-Book
Publication Date: 27th January 2015
My Rating: 🌕🌕🌕🌕🌜
Date Finished: 29th October 2021
Description:
Play with fire, pay the price.Leila’s years on the carnie circuit were certainly an education. What she didn’t learn: how to be a vampire, or how to be married to the most famous vampire of them all. Adjusting to both has Leila teetering on a knife edge between passion and peril, and now the real danger is about to begin…Vlad must battle with a centuries-old enemy whose reach stretches across continents and whose strength equals his own. It isn’t like Vlad to feel fear, but he does…for Leila, because his enemy knows she is Vlad’s greatest weakness. As friend and foe alike align against him—and his overprotectiveness drives Leila away—Vlad’s love for his new bride could be the very thing that dooms them both…
Review:
Now that I have all the books in this series, I just have to read them all!
This one starts several weeks after the last with Leila now a vampire and trying to find some of Szilagyi's cohorts while at a masked ball hosted by her husband, Vlad. They aren't sure who are allies and who are enemies any more after the events of the previous book. They travel the globe looking for answers from Romania to Las Vegas and New Orleans before finally locating him.
I actually like how much Vlad is starting to...erm...mellow? He used to be this hard man who was just trying to do the best for his people but now he's fallen in love and is adjusting to having Leila be a great match for him - she doesn't always need his help - and her pluckiness means she can endure a lot before she even thinks of breaking and he admires that a lot about her.
And then it threw us a curve ball at the end. We assumed everything would be over once Szilagyi was out of the picture but nope, they still have one more thing to do. I've already started book 4 just to see how this series is going to end. Off to finish it now!
at Saturday, October 30, 2021