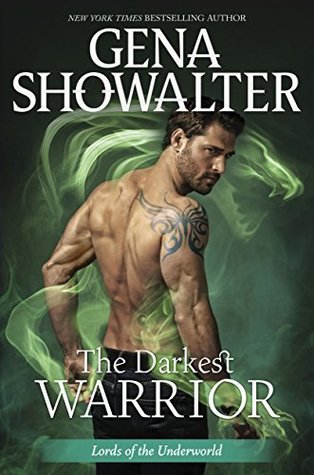 Book: The Darkest Warrior
Author: Gena Showalter
Series: Lords of the Underworld, #14
Genres: Paranormal Romance
Format: Paperback
Publication Date: 28th May 2019
My Rating: 🌕🌕🌕🌜
Date Finished: 16th September 2021
Description:
He is ice…Possessed by the demon of Indifference, Puck the Undefeated is unable to experience emotion without pain…until her. According to an ancient prophecy, she is the key to avenging his past, saving his realm and ruling as king. All he must do? Marry her.She is fire…Gillian Shaw has suffered many tragedies in her too-short life, but the worst is yet to come. To survive a transition into immortality, she must give herself to a monster who both intrigues and frightens her…and become the warrior queen she was born to be.Together they burn.The more he learns about his clever, resourceful wife, the more he craves her. And the more time Gillian spends with her protective husband, the more she aches for him. But the prophecy also predicts an unhappily-ever-after. Can Puck defy fate to keep the woman who brought his deadened heart back to life? Or will they succumb to destiny, losing each other…and everything they’ve been fighting for?
Review:
I've been reading this series for about 10 years now. I picked up three paperbacks in the series last year or so and this is the only one I haven't got around to reading yet, so here goes. I hope Puck and young Gillian's story is as interesting as I expected her romance with William to have been...
So, this starts with Puck and his younger brother Sin warring for their realm of Amaranthia before Puck is betrayed by his brother over the long spoken prophecy about them both. Puck heads out to the Oracles of his land and they tell him what he must do. He must marry Gillian, the one meant for William of the Dark.
I wasn't sure how I was going to feel about this one, after the above mentioned thing, but I did like it but not as much as some of the previous books in this series. I think the span of time when Gillian is left in Amaranthia without Puck - 500+ years - and we don't see her change from the meek little teen to the kick-arse warrior apart from in those letters addressed to Puck. I feel like we missed out on some fun scenes.
I did enjoy seeing some of the previous characters making an appearance in this one like Keeley and Torin and even once-upon-a-time bad guy Galen. There is still that fun dynamic between characters where they rib each other and even sometimes attack each other and it's all in jest. It's crazy but I love it.
I do feel the ending was a bit of a let down after all that build up. The battle took all of about six pages in the end.
I am glad that Puck and Gillian got their HEA but I think I'm more interested in the "geek" that is going to be William's salvation and the woman he will fall in love with. Need to buy that book!
at Thursday, September 16, 2021