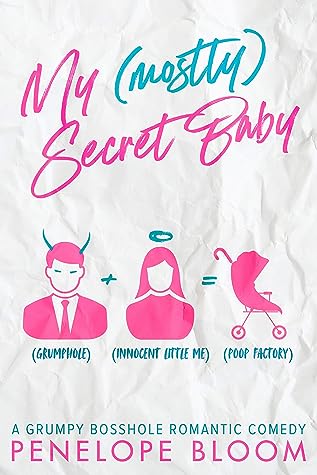 Book: My (Mostly) Secret Baby
Author: Penelope Bloom
Series: My (Mostly) Funny Romances, #1
Genres: Romance, Comedy, Erotica
Format: Kindle e-Book
Publication Date: 6th July 2020
My Rating: 🌕🌕🌕🌜
Date Finished: 27th September 2021
Description:
You know that instinct to run when something bad is coming? Yeah. I apparently missed out on that one.Because Damon Rose came, and instead of running, I got pregnant.DamonYes. I remember Chelsea Cross.I remember five years ago when she thought she could handle me.Proving her wrong was… enjoyable.With hair I wanted to fist. A mouth that only stopped when I kissed it. A body that I needed to press against the nearest wall and claim.And now she wants a job.A smart man would say “no”.Or, I could teach her the same lesson I taught her five years ago.She can’t even begin to handle me.
Review:
I've read one other book by this author before, His Banana, that was an office romance/enemies to lovers thing and thought it was totally bonkers but funny.
So this one starts with Damon trying to find his elusive brother, Chris, as they head to an important meeting about his brothers career when he ends up bumping into Chelsea outside the hotel. They instantly lock horns due to Damon's rather horrible personality and Chelsea's stubbornness means she has to have the last word...which leads them to having angry sex in one of the hotel's conference rooms. Fast forward five years and Chelsea is in dire need of a job and Damon is looking for a new employee. Sparks still fly between them but what's going to happen when Damon finds out the condom broke and he has a four year old daughter?
One thing I will say for this authors books: they're not the longest and therefore you can probably read them in one sitting in just a few hours.
I wasn't entirely pulled into this, not until about half way when the weird little stunts they'd been pulling on each other started to get reactions and the tension between them erupted. Damon had a bit of a kinky side, which is why I've classed this as erotica because the sex was rather steamy.
Their relationship was a little odd, especially at the start, but I think I understood it enough by the end.
One person I did like was little Luna. She's a riot. Chelsea has brought her up to be an independent little thing and her own cheekiness makes her such a cute little package and I have a big weakness for cute kids in my stories.
I haven't decided if I'll read another of this authors works yet.
at Tuesday, September 28, 2021