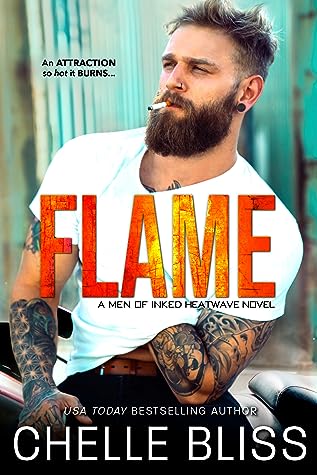 Book: Flame
Author: Chelle Bliss
Series: Men of Inked: Heatwave, #1
Genres: Romance, Contemporary
Format: Kindle e-Book
Publication Date: 17th September 2019
My Rating: 🌕🌕🌜
Date Finished: 6th September 2021
Description:
Could you love a man surrounded by danger?Gigi Gallo’s childhood was filled with the roar of a motorcycle and the hum of a tattoo gun. Fresh out of college, she’s about to start working at her family’s tattoo studio — Inked. But when she shows up the first day, she never expects to run into someone tall, dark, and totally sexy from her not-so-innocent past.Pike Moore is a bossy biker with a cocky attitude and an even bigger ego. He came to Inked to start over. New town. New job. New roots. None of that included coming face-to-face with the hot chick who spent a week in his bed before she vanished without a trace.But when Pike’s dark family history catches up with him, can he stop Gigi from being caught in the crossfire?
Review:
This starts with Gigi eyeing up the guy at the end of the bar and being too chicken to approach him despite the fact he's been staring at her, too. With a bit of coaxing from her friends and a lot of alcohol, she finally heads over and asks if he wants to go back to his hotel. Things take a strange turn and they end up spending several days together before they end up going their separate ways. Fifteen months later they unexpectedly meet again at Gigi's family's tattoo parlour, Inked, which is the place to work and be tattooed. Gigi is initially angry to see Pike but the feelings that had started to stir within her all those months ago start to unravel once more but it seems trouble may be after Pike and he wants her far away from it.
I was intrigued not long after this started - when their night together didn't go according to plan - and I wanted to see where it was going to go from there. It was fun and a little steamy. So I didn't entirely understand Gigi's reaction to Pike's turning up in her neighbourhood. Like he was some vile creature or worse. And then suddenly, she wanted him again. I was confused.
The book went downhill for me when they ended up at the MC. I am not a fan of motorcycle clubs at all. Maybe because I'm British and we don't have them. They just seem so lawless and do whatever they want. That kind of thing does nothing for me.
I won't be reading any more of this series.
at Wednesday, September 08, 2021