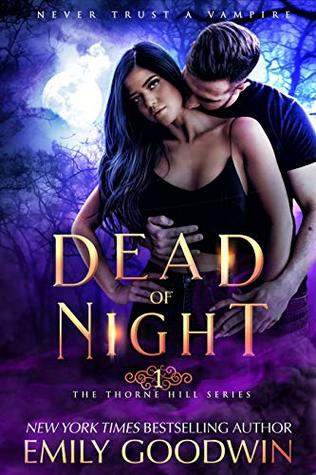 Book: Dead of Night
Author: Emily Goodwin
Series: Thorne Hill, #1
Genres: Paranormal Romance, Vampires, Witches
Format: Kindle e-Book
Publication Date: 23rd March 2019
My Rating: 🌕🌕🌕🌜
Date Finished: 25th September 2021
Description:
Never trust a vampire.I might have learned that lesson the hard way. But when I find myself in a vampire-owned bar, I don’t have much of a choice. With vampires still trying to assimilate into mainstream society, I’ve done Lucas King a favor by stopping one of his patrons from draining a human dry in the basement of his bar. A favor he'd prefer to repay in bed than in kind.Vampires and witches have had more than a jaded history, and when witches start showing up dead in surrounding covens, all signs point to something old and powerful. Something that knows the ways of the witches.Something--or someone--like Lucas. What's worse than trusting a vampire? Falling in love with one.
Review:
I grabbed this as a freebie last year and something about the cover just drew me in. And then the description had me intrigued.
This starts with Callie defeating some low level demons that have been attacking hikers in her local country park before heading to the bookshop she owns with fellow witch and her best friend before they head out for a meeting at her local coven where she finds out that witches are being hunted by something. She bumps into a vampire on a night out and when she attacks him for taking blood without permission, she also meets ancient vampire, Lucas, who is instantly drawn to the pretty witch who isn't afraid of him and who makes him feel for the first time in centuries.
On one hand I really liked this. Their romance was pretty cute and I like how it progressed. Lucas was all in from pretty early on after meeting the first person in centuries who made him feel anything while Callie was a little wary of dating a vampire but unable to resist him when he's continuously coming to her aid and helping her with her errands and figuring out who or what has been killing the witches.
On the other hand, I felt like not all that much happened - even though I know, at times, there was a lot of things going on. It's just that the bits involving the witchcraft and the demon hunting bored me a little. It was the romance that kept me reading.
I am intrigued by the continuing trials of these two in a society where they should be enemies but I'm not in a hurry to continue the series.
at Saturday, September 25, 2021