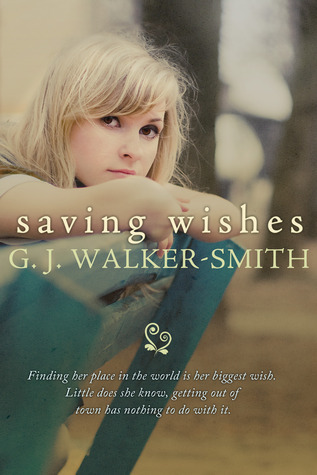 Book: Saving Wishes
Author: G.J. Walker-Smith
Series: Wishes, #1
Genres: Young Adult, Romance
Format: Kindle e-Book
Publication Date: 10th February 2013
My Rating: 🌕🌕🌕
Date Finished: 23rd August 2021
Description:
For Charli Blake, being seventeen is a tough gig.She's been branded a troublemaker, her reputation is in tatters and she's stuck in Pipers Cove, a speck of a town on the coast of Tasmania.Thankfully, it's temporary. Her lifelong dream of travelling the world is just months away from becoming reality. All she has to do is ride out the last few months of high school, which is easier said than done thanks to a trio of mean girls known as The Beautifuls.
When Adam Décarie arrives in town, all the way from New York, life takes an unexpected turn. His arrival sets off a chain of events that alters her life forever, convincing her of one thing. Fate brought him to her.
Review:
This is another long serving Kindle book that must have been on my device for about five years. I do have a tendency to buy/download (freebies) books and forget about them.
This starts with Charli leaving her brothers diner/convenience store to head home in the rain only to be nearly hit by a car she doesn't recognise - one belonging to new arrival Adam. Adam has been drawn to the small Tasmanian town after receiving postcards from his cousin showing beautiful views in the area. They initially clash but both find themselves inexplicably drawn to each other and feelings bloom between the pair. He makes her want things that she'd started to give up on.
I wasn't sure about this to start with. Charli doesn't come across the best initially - she's a stubborn, argumentative teen - but the more we read about her and the things that she's been through in the tiny town we begin to sympathise and see she isn't so bad and is doing the best she can to protect herself from future hurt.
Adam came across as a nice guy from the start but at the same time we never really learned much about him - not for a long time anyway.
I enjoyed the first 25% or so but then it all sort of stayed as it was - we didn't really have any major things happen to throw some drama about and I got a little bored. There was a bit of drama thrown in towards the end that had me intrigued enough to carry on but it didn't full pull me in at any point.
I wasn't keen on how the first part of this series ended, either. Everything is left open. She goes travelling but not with who she was supposed to. Adam is in New York and Charli ends up in Mauritius. She left before school finished... I don't know, maybe I expected her to stick to her guns but unexpected things got thrown at her right at the end and she did need to escape. I'm not sure if I'll continue the series.
at Tuesday, August 24, 2021