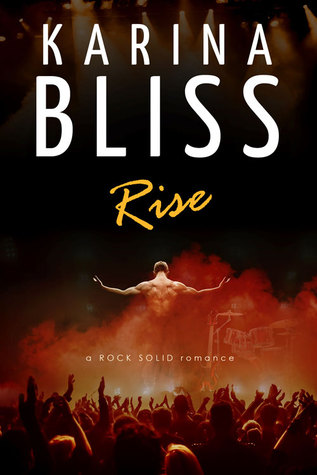 Book: Rise
Author: Karina Bliss
Series: Rock Solid, #1
Genres: Romance, Rock Stars, Contemporary
Format: Kindle e-Book
Publication Date: 28th January 2015
My Rating: 🌕🌕🌕🌕🌜
Date Finished: 6th August 2021
Description:
Rise - The redemption story of a rock star going straight(er) through the love of a good(ish) woman.Acclaimed literary biographer Elizabeth Winston writes about long-dead heroes. So bad-boy rock icon Zander Freedman couldn’t possibly tempt her to write his memoir. Except the man is a mass of fascinating contradictions–manipulative, honest, gifted, charismatic and morally ambiguous. In short, everything she seeks in a biography subject. When in her life will she get another chance to work with a living legend? But saying yes to one temptation soon leads to another. Suddenly she’s having heated fantasies about her subject, fantasies this blue-eyed devil is only too willing to stoke. She thought self-control was in her DNA; after all, she grew up a minister’s daughter. She thought wrong.Rock star Zander Freedman has been an outlier–many would say an outcast–for most of his life. But there’s no disaster he can’t overcome, from the breakup of his band to the inevitable damage to his reputation. His Resurrection Tour is shaping up to be his greatest triumph–if his golden voice holds out. Contracting a respected biographer is simply about creating more buzz. Elizabeth’s integrity is the key to consolidating his legacy as one of rock’s greats. All the damn woman has to do is write down what he tells her. Not force him to think. Or encourage the good guy struggling to get out. And certainly not make him fall in love for the first time in his life. Turns out he is scared of something: being known.
Review:
This one is another oldie on my Kindle, being there since 2017 when I picked it up as a freebie at Amazon.
It starts with Zander trying to get a prescription for steroids - for his vocal chords - renewed before he heads out on stage for the last part of his American leg of his world tour. After a decade on the scene, he wants someone to write his memoir and contacts Elizabeth Winston - who has written several memoirs that he's enjoyed - who reluctantly agrees to it after meeting him and adding a "no-fire" clause into her contract. Zander expects her to rehash old stories already printed but Elizabeth is determined to get to the real Zander. Equally annoyed and fascinated by the fiery redhead, he can't help but feel a connection to her.
This is a book that took me a while and it wasn't because I wasn't into it. I was quickly pulled into this - at the start in a where is this going to go way - but it quickly became more than that. I was intrigued by these characters. We see things from more than just our main characters POV's, which was interesting.
I feel like this is a story of redemption. Zander was the typical rock star when he was younger and made several mistakes before things ended badly with the original lineup of his band, Rage. He's decided to make a comeback by finding a new lineup and doing a world tour and wants someone to write his memoir. He's on his third biographer with Elizabeth and she slowly works her way under his skin. He actually went from being someone I wasn't sure about to someone I really liked. He allowed himself to be vulnerable around her and he became a nicer guy.
There romance was slow going but you could see it was going to be inevitable. There was a connection that grew slowly and by the time they decided to do something about it, I was happy for them. Of course, romances always have an issue in them for the drama value and this one actually had several. By that time, I'd become emotionally invested in these two and read through my tears. I'm glad it all worked out in the end.
I am intrigued enough by the rest of the band and Dimity - I still have no idea how to pronounce that name - to finish this series at some point in the future.
at Saturday, August 07, 2021