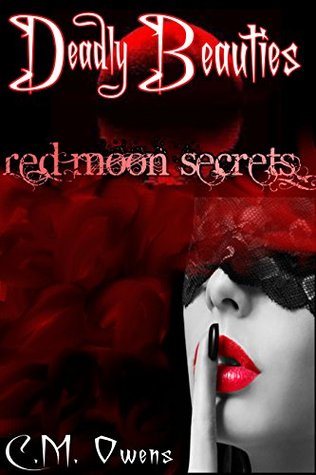 Book: Red Moon Secrets
Author: C.M. Owens
Series: Deadly Beauties, #3
Genres: Paranormal, Romance, Vampires, Shapeshifters, Witches
Format: Kindle e-Book
Publication Date: 16th June 2014
My Rating: 🌕🌕🌕🌕
Date Finished: 20th August 2021
Description:
Secrets are spilled, lies are revealed, and dark destinies emerge. She's judged them all - now they'll be the ones to judge her.Alyssa is no longer seeing the gray area - she's living in it. A destiny she never considered is consuming her. Everything ends, and it ends now - no matter what the outcome.
Review:
I bought this before I'd even finished book 2 because I just knew there would be things left unfinished and I would NEED to know what was going to end up happening.
Alyssa is still undecided between her two men after having the prophecy revealed to her. It pushes her to the edge and she blacks out, waking up in Kane's arms a little while later. The blackouts continue and it seems the prophecy may be coming true - Alyssa is the descendant of Fey gods - and her multitude of powers are slowly breaking free of her control. She needs to learn to control them or she'll be dealing with a war as the different supernatural breeds will start a war to take her out.
I put off reading this - dragging it out for several days longer than necessary considering it's the shortest of the trilogy - as I seem to do every last book of series' I read. And it was probably for the same reasons: I don't want to never read these characters again. (I do know the author has done books for the rest of the guys).
This was quite a fitting end to this trilogy. It all culminates in this one - all the unanswered questions we've gathered from reading the previous books - and we finally get answers as to who's been behind it all. And it surprised me! I did not expect certain people to be involved.
This is a very enthralling series and I can't recommend it enough if you're into paranormal stories.
at Friday, August 20, 2021