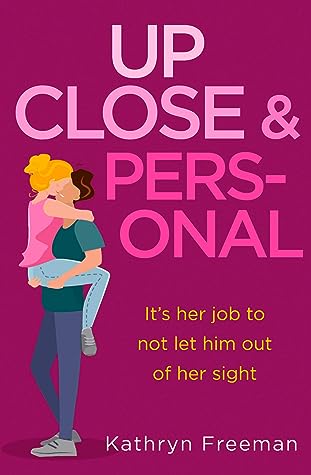 Book: Up Close & Personal
Author: Kathryn Freeman
Genres: Contemporary, Romance
Format: Paperback
Publication Date: 3rd September 2020
My Rating: 🌕🌕🌕
Date Finished: 28th July2021
Description:
She can’t let him out of her sight…Sizzling chemistry, a page-turning will they/won’t they romance and the hottest twist on one of your favourite movies…British actor Zac Edwards is the latest heartthrob to hit the red carpets. Hot, talented and rich, he sends women wild…all except one.Close protection officer Kat Parker hasn’t got time to play celebrity games.  She has one job: to protect Zac from the stalker that seems to be dogging his every move.Zac might get her hot under her very starched collar, but Kat’s a professional – and sleeping with Zac is no way part of her remit…
Review:
Picked this paperback up from one of my favourite has everything stores The Works.
This starts with Zac, an up and coming film star heading to a studio party to wine and dine with the execs when he bumps into an attractive woman he feels an instant connection to. They flirt a little but she manages to elude him in the throng of partygoers. It's the next day when he meets her again at the studio, and it turns out she's been tasked with keeping him safe from the stalker he appears to have picked up after his latest film shot him to stardom. Their mutual attraction simmers beneath the surface but Kat is determined to keep him at arms length and their relationship professional but what is she to do when an attractive film star is trying his best to seduce her?
This starts at full speed with Kat literally falling into Zac and dowsing him in her champagne and Zac quickly becomes smitten and the flirting is nice and continues for quite a while. Even when he finds out she's set to be his new bodyguard he can't help but be drawn to her - even while moaning about not being able to live his life normally. It was a fun dynamic.
But then it seemed to stutter a little. Nothing exciting happened, even though Zac was filming a movie and we had a crazy stalker on the loose. It was like the author chose to focus on the will they, won't they romance between our characters instead of some of the fun things a celebrity could have been up to, although Zac did visit Silverstone at one point. Even the romance got a little boring at times - Zac would do his usual charming flirting and Kat would shut it down fast. It got a little repetitive.
My favourite character would probably be Debs, Kat's 14 year old niece who was a little bit bratty at times with her hormones going riot but who was wiser than her years at times in telling her aunt to go after the man she wanted.
I'd give this 4 star for the first half and 2 stars for the second, so an overall 3 stars for this book.
at Thursday, July 29, 2021