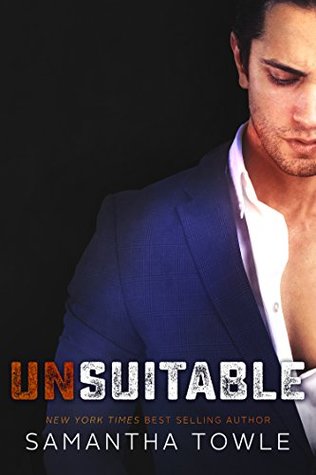 Book: Unsuitable
Author: Samantha Towle
Genres: Romance, Contemporary, Dark
Format: Kindle e-Book
Publication Date: 1st October 2016
My Rating: 🌕🌕🌕🌜
Date Finished: 16th July 2021
Description:
Daisy Smith has spent eighteen months of her life paying for a crime she didn’t commit. Now out of prison, she has only one focus—to get back custody of her younger brother, Jesse, who is deep in the foster care system. Desperate to rebuild her life and show the system that she is responsible enough to care for Jesse, she takes on the only job available to her—working as a maid at the Matis Estate.On day one of her new job, Daisy meets Kastor Matis, the only son of the owners and her new boss. An enigmatic, handsome Greek god of a man, Kas is closed off, cold, and…well, kind of a bastard.The more time Daisy spends around Kas, she starts to see there might be more to him than just his cold, bastard ways. He may actually have a heart beating in that frozen chest of his.But Kas has secrets, too. Secrets that he’s determined to keep.Secrets make Daisy curious.And you know what curiosity can do…
Review:
I'm trying to read some of my older books and this has been sitting on my Kindle for 18 months waiting patiently to be read, and Samantha Towle is one of my "will read whatever she writes" authors so I'm hoping I like this.
This starts with a rather harrowing prologue. A young man has been beaten to within an inch of his life, along with his girlfriend who unfortunately doesn't survive the attack. We then go forward a few years and see Daisy being questioned about a crime she didn't commit and for which she spends 18 months in prison for. In the present Daisy is being released and is given a job as a maid at a big house - the Matis Estate - where Kastor Matis is an aloof boss. But the more time Daisy spends around him, the more she begins to see a softer side to him at times and before she even realises, she's falling for him but Kas is hiding something and Daisy is determined to figure out what it is.
I don't know with this one. For the first 75% or so I was pulled in hook, line and sinker but then I started to lose interest. It was various things. Daisy's nosiness; Kas's lying; the where is this going to end up going? If it hadn't been for the extended Epilogue, I wouldn't have been impressed by the way this ended. Luckily they did get their HEA, it just took 3 and a half years after the ending.
I've just read the Author's note at the end and she says Kas is one of the most complex characters she's ever written and I have to say that I did find him complicated. He pushed her away, he pulled her back in, he showed her his softer side and then his more ruthless one. I'm not surprised Daisy felt like she was going to get whiplash from his hot and cold routine. But at the same time it was hard to not care about him.
There are some dark themes in this, as I mentioned above. It does get described in more detail throughout the book and even Daisy almost has a horrifying experience.
As I've also mentioned, I am a fan of Samantha Towle and I look forward to reading more from her in the future.
at Friday, July 16, 2021