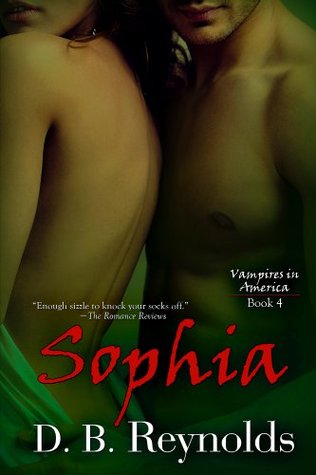 Book: Sophia
Author: D.B. Reynolds
Series: Vampires in America, #4
Genres: Paranormal, Romance, Vampires
Format: Kindle e-Book
Publication Date: 19th January 2014
My Rating: 🌕🌕🌕🌜
Date Finished: 12th July 2021
Description:
The Pacific Northwest . . . home to lush forests and constant rain, to lumberjacks and computer geeks, especially those of the vampire kind.Sophia, beautiful and deadly, has spent the last hundred years dancing her way through the balmy nights and hot-blooded men of South America. But when her Sire sends an urgent summons, Sophia rushes home to Vancouver only to find he has disappeared, leaving nothing behind but three dead vampires and a letter with Sophia’s name on it.Colin Murphy, a former Navy SEAL, came to the Northwest seeking a quiet place to heal the scars earned in more than a decade at war. But when someone starts killing local vampires and torturing their mates, Colin takes on the mantle of a warrior once again as he sets out to find the killers and do whatever it takes to stop them, even if that means hunting with vampires.Following her Sire’s trail of death to a small town in northern Washington, Sophia unexpectedly discovers the heat of a South American night in Colin’s arms. But too soon Sophia and Colin find themselves in a race to uncover the killers before the next dead vampire becomes Sophia herself.
Review:
I've had this book for several years, I think, after reading books 1-3 in quick-ish succession but not enjoying the third as much as the previous two. I also have books 5 and 6.
This starts with Sophia on a plane from South America up to Canada where her Sire, Lucien, has summoned her but upon her arrival finds him missing with only a letter left for her. After reading it she heads south into Raphael's territory to ask if he's heard or seen of Lucien and then tells him of some murders which have happened in Lucien's territory. Raphael has recently lost some vampires, too, and they team up to try and find the men behind the killings before more vampires lose their lives.
I think the thing I like most about this series is that it always contains more of Raphael and Cyn and their relationship which book 1 of this series focused on and they've been a main focus of every other book in the series so far since, as well as focusing on another couple - though mainly on Raphael and Cyn.
I did feel a little like Sophia's and Colin's romance was a little rushed in this. I know they had a past but it felt like they fell back into it very quickly and easily considering it had been 10 years and he thought she was dead.
I was rather appreciative of Raphael and his powers in this one. He used them for revenge and I was cheering him on all the way.
As mentioned above I do own books 5 and 6, too, but I'm not in a rush to continue the series quite yet.
at Monday, July 12, 2021