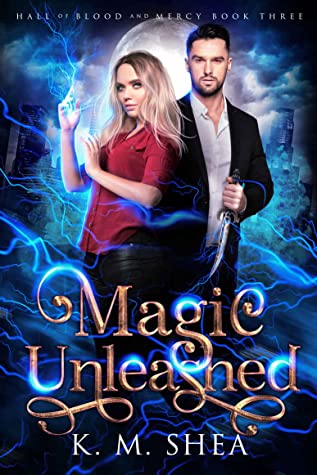 Book: Magic Unleashed
Author: K.M. Shea
Series: Hall of Blood and Mercy, #3
Genres: Urban Fantasy, Romance, Vampires, Witches
Format: Kindle e-Book
Publication Date: 17th April 2020
My Rating: 🌕🌕🌕🌕
Date Finished: 25th July 2021
Description:
Ever had ex-housemates you can’t get rid of?When Killian and the rest of the Drake vampires kicked me out of their mansion without any explanation, I felt beyond betrayed…I was livid!But I refused to waste my energy thinking about them. Thanks to all the free training I got while living with vampires, I had the skills I needed to finally free my family. I even got my house back! Best yet, I can pass on the magic techniques and fighting skills I’ve learned to all the wizards in our group.As long as I ignore the rotating vampires standing watch on the corner across the street, life is normal again…until the fae risk injuring hundreds of supernaturals just to stage a surprise attack on Killian.There’s no way I’m going to let the fae get away with this. I may be furious with Killian, but I hate bullies even more.But, big surprise, my good deed won’t go unpunished. I knew I’d face a fallout for saving the most feared and lethal vampire in the Midwest—I just never imaged the lengths Killian would go through to protect me and win me back…
Review:
The last book in the trilogy! Eeep! I really hope this has a good ending. Here goes...
This starts with Hazel training with her House after reclaiming it at the end of the last book. She's trying to get a law passed that will stop what happened to her happening to others as well as gaining allies in the magical community. When Killian comes forward wanting to become an ally, she's dubious as he never does anything without an agenda but when he starts to let her into his schemes and treating her as an equal she can't help but be pulled back under his spell and the attraction that had started to blossom flares back to life. Hazel tells Killian that she won't start anything with him, though, until they sort out the issue of the Night Court.
I do like this group of characters a lot. Killian's close knit group of vampires are really likeable and even Hazel's witches grew on me in this one. So when they worked together? I was grinning like an idiot at their antics and camaraderie.
And let's not forget Killian and Hazel's relationship. Killian changed quite a bit - in a good way - letting Hazel show him other ways of getting want he wanted without killing everyone who annoyed him. He also started to treat Hazel as an equal, which is a big thing for him. I was just feeling a little wowed by how it all worked out perfectly.
I did miss some of the things that normally happen in romance books - like more intense contact than just kisses - but at the same time I did like their dynamic. It was cute.
I am going to miss these guys but I've read the authors notes and the other book titles by her and seen that the next door neighbour, Leila? is going to be getting her own series and I'm intrigued enough to think of buying it or other books by this author.
at Sunday, July 25, 2021