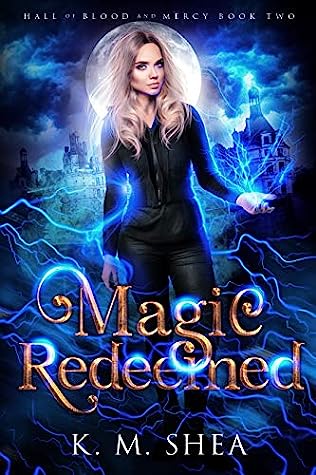 Book: Magic Redeemed
Author: K.M. Shea
Series: Hall of Blood and Mercy, #2
Genres: Paranormal, Urban Fantasy, Vampires, Witches, Romance
Format: Kindle e-Book
Publication Date: 20th March 2020
My Rating: 🌕🌕🌕🌕
Date Finished: 22nd July 2021
Description:
I thought life would be easier after I unsealed my magic.Spoiler: it’s not.I want to free my family from my traitorous cousin, but with all the allies he’s got guarding his back, even my new powers won’t be enough to beat him. My best bet is to use my parents’ signet ring to prove my claim of leadership.There’s just one problem…I can’t find it!Things aren’t looking so good for my vampire housemates, either. As Killian Drake’s conflicts with the fae get worse, it's clear that war will break out soon if something doesn’t change.Plus, Killian has gotten really weird about smelling me and invading my personal space. Every time he comes near my heart almost pops out of my chest, but I’m sure that’s just terror caused by being so close to the most feared vampire in the region.At least that’s what I keep telling myself.So, I’m a wizard searching for a ring while trying to survive living with a bunch of vampires and their deadly and suddenly touchy-feely leader. Yeah, life is definitely not easier.
Review:
So, I jumped straight into this one after finishing the first book and even bought book 3 because I am that intrigued by where this book is going to end up going - and also because the author has clearly stated that this is a slow-burn romantic trilogy and I really like both Killian and Hazel.
This one picks up two months after the events of the first with Hazel still living and training with the Drake vampires as she tries to take back control of the house she had to abandon when her cousin staged a coup. Hazel now has full use of her magic and is even managing to take down lower members of the Drake household in one on one fights. She just needs to find the signet ring so she can claim control of her House
I loved Killian's sense of humour at times. I laughed at so many of his throwaway comments. And how modern his vampires are! It was fun to see people who had been around for hundreds of years knowing and executing wrestling moves on enemies.
The progression of their relationship was subtle and really well done so as to make it believable. And then Killian went and ruined it - though he did have some reasoning behind it, I suppose.
I wasn't expecting Hazel to fight for her house in this one but good for her for showing Mason and co that she is no longer the push-over from months before. It was great to see that all the training she'd been doing and the words Killian had been drilling into her were true.
Already started book 3!
at Friday, July 23, 2021