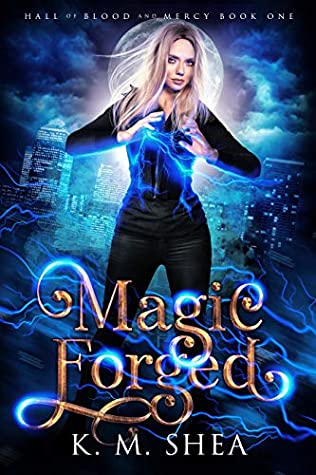 Book: Magic Forged
Author: K.M. Shea
Series: Hall of Blood and Mercy, #1
Genres: Paranormal, Urban Fantasy, Vampires, Witches
Format: Kindle e-Book
Publication Date: 28th February 2020
My Rating: 🌕🌕🌕🌕
Date Finished: 21st July 2021
Description:
I'm one scrappy wizard. As someone with barely a flicker of magic, I've spent my life being mocked and surviving fights with bullies. But when my parents die in an accident, and I find myself responsible for our whole wizard house and family, I know my usual tactics aren't going to cut it.The situation veers from bad to catastrophic when my backstabbing cousin stages a coup and takes my family hostage. I barely manage to flee, but the only supernatural willing to help me is Killian Drake - the most feared vampire in the region, and a far more deadly villain than the jerk threatening my family.Is Killian sexy and charismatic? Heck yeah.He's also so powerful that my flight or fight instincts kick in every time our eyes meet. And he's definitely using me as his personal magic detector in his feud against the local fae.But Killian is also the first person to believe I might have more than just a scrap of magic. And if I can convince him to train me, I might get strong enough to free my family and get my house back.I'm not sure what happens when a scrappy wizard is taught how to fight by a hall of deadly vampires, but I'm about to find out.
Review:
I've had this on my Kindle since the start of the year so it isn't that old but the covers been catching my eye for a while.
This starts with Hazel trying to outrun a fellow wizard who wants to eradicate her weak power from the bloodline of her house, despite her being the heir. Only when she finally arrives home, it's to learn that her parents have been killed in a car accident and she is now in charge. When a distant cousin decides to stage a coup she has no choice but to run and seek help from her allies but because of her weak powers, no one is willing to help - apart from Killian Drake, head of the ruthless Drake vampire family.
I was slowly drawn into this. I wasn't sure at the start but as soon as Killion Drake was properly introduced and Hazel was his employee and he started training her/having her trained, then it became quite fun and quirky. I loved their dynamic. They weren't exactly friends, not enemies either. They made an effort for the other on various occasions throughout and Hazel got away with a lot compared to anyone else. It had me intrigued as to where that may end up going...
I had visions of a romance from pretty early on but nothing happened really in this one. It certainly hasn't put me off, though, and I've already gone and bought books 2 and 3 because I want to know what's going to happen next with this group of vampires, as well as between Hazel and Killion and also Hazel getting her House back from the back stabbing cousin.
Already started book 2, will review that soon.
at Wednesday, July 21, 2021